Astraea donors Jewelle Gomez and Diane Sabin share why they choose to #GiveToAstraea. 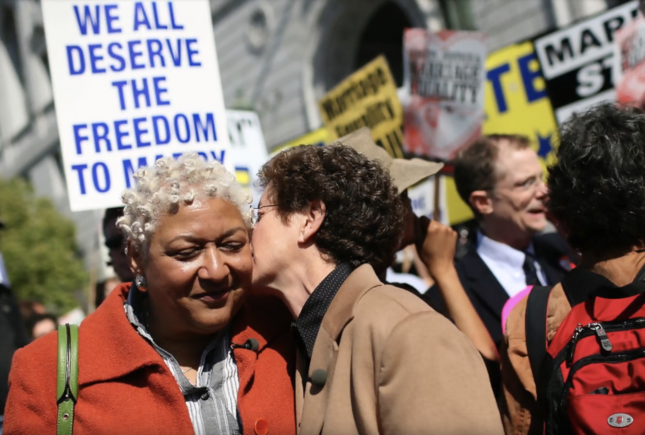 It’s Giving Tuesday! Today is a day that celebrates the role we all play in philanthropy, justice, and changing the world.

Today, in the spirit of Giving Tuesday and to kick off the giving season, we want you to hear from our long-time donors, Jewelle Gomez and Diane Sabin. Watch the video above to hear more about why they choose to #GiveToAstraea.

Want to help us fuel the frontlines of LGBTQI justice all around the world? Donate!

Jewelle and Diane were plaintiffs in a lawsuit that overturned the ban on same-sex marriage in the state of California. They were legally married in San Francisco in 2008 after 16 years of partnership. Jewelle and Diane also co-launched Astraea’s Justice Social Program in 2005.

Jewelle Gomez is an award-winning author of seven books, including the double-Lambda-Literary-Award-winning novel The Gilda Stories, an activist, Director of Grants and Community Initiatives for Horizons Foundation, and President of the San Francisco Public Library Commission. Jewelle has been an Astraea supporter since the 1980’s and was one of Astraea’s earliest board members.

Diane Sabin is the Executive Director of the Lesbian Health and Research Center at the University of California, San Francisco. Diane has been an Astraea supporter since the 1990’s and was an Astraea board member in the 2000’s. She was also Astraea’s 2001 Philanthropic Activism Award recipient.

[Donor and Supporter, Diane Sabin]: One of the amazing things that Astraea has done is bring so many individuals and organizations together for that really rich interchange and learning and new efforts that come out of that and better efforts doing what’s already been done.

[Donor and Supporter, Jewelle Gomez]: I feel a very strong commitment to the politics of feminism and to understanding how history has shaped us both as women and as lesbians and as queer people, and understanding how capitalism has been used against marginalized people. Those are really core values for me and seem to be for Astraea.

Being around Astraea for a long time, I feel really fortunate because it means I get connected to a lot of people who have serious commitment to philanthropy.

[Diane Sabin]: My values would be working to create a world that is more just and equal for all. And I think Astraea has, throughout the organization’s existence, been very, very dedicated to that, been exploring what does that mean, and morphing and changing as the times morph and change, delving into new areas of thought, of action, of geography, of gender. Just an amazing organization that puts into real life the value of giving everybody an opportunity to be fully themselves and contribute to the culture in a maximal way.

[Jewelle Gomez]: I believe that liberation is a process. It’s not something we arrive at, and then we’re done. We all must learn to take part in our own liberation and the liberation of others. Over time we can work towards making social justice happen. And it’s not going to happen like overnight suddenly everything is fine. I think it’s important for everyone to learn how to make social justice as a goal part of your everyday, and one of the things that Astraea is able to do is take that intention for social justice and put it into action by supporting organizations that are doing the work that’s the most important. Then that means we’re monitoring how we give and how we behave, and I think that’s what we have to learn to do, not think “Oh I gave and then I’m done, and it’s happened,” but “Oh I gave, and now what do I give today?”

[Diane Sabin]: And I would just ask you to think of yourself as connected to it all, and dig into your pocket. Give some money. Definitely give some time. Definitely tell people about it. And let’s just continue to make a better world. That’s what it’s about.