Margot became a lawyer and provided pro bono legal work for Astraea when it was founded, remaining an ardent supporter. 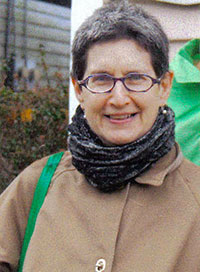 Arlene Bronstein was a 60-year-old lung-cancer survivor and retired law firm records manager. Somjen Frazer is a 27-year-old research and evaluation consultant for progressive non-profits and half of the comedy duo Mustache Clowns. What do they have in common? Astraea, for one. Both have expressed their strong commitment to LGBTI arts and activism around the globe by making a contribution every month. For decades, Arlene, Somjen and donors like them have been integral parts of Astraea’s success.

“I’m a quiet donor,” Arlene said. Though modest about her impact, Arlene was a monthly sustainer for nearly three decades. It adds up. Over the years, Arlene gave more than $20,000.

“At first, I liked that Astraea was the only charity devoted to lesbian issues, though that was not openly stated. Of course, it was also the connection to Margot Karle.” Margot and Arlene became immediate and life-long best friends in high school. Later, Margot became a lawyer and provided pro bono legal work for Astraea when it was founded, remaining an ardent supporter. After she passed away, Arlene began making contributions in her memory.

“Now there are other lesbian charities,” Arlene said, “but in my mind, Astraea still is the most diverse regarding the community it deals with. Astraea interprets ‘community’ in the widest possible sense.”

Arlene and donors like her have helped insure the growth and impact of Astraea, from a small regional foundation granting just $6,000 in the first year to an international force for change, distributing $2.2 million last year to LGBTI activists working for human rights worldwide.