“I love Astraea because of the connections you help forge; because you fund activists in parts of the world that I can’t find on a map; and because there’s a sense of family that extends from your New York City office to everyone who comes into contact with you.” 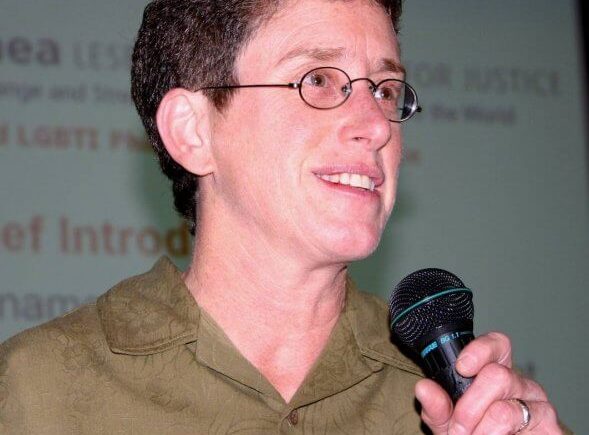 Diane Sabin, DC, has been a community activist since 1973. Currently she serves as the Executive Director of the Lesbian Health and Research Center at the University of California, San Francisco. Diane has a long history with Astraea. She served on the Board of Directors, co-hosted the launch of the Justice Social Program, and was the recipient of the Astraea Philanthropic Activism Award in 2001. Diane lives in San Francisco with her partner, the writer and activist Jewelle Gomez.

On the last morning of Astraea’s 2006 Giving and Activism Retreat, there was barely a dry eye in the house. Streaming to the microphone to address the Astraea staff, members and grantees alike spoke from the heart about Astraea’s work, each committing a multi-year pledge to the Foundation. While Diane is reluctant to claim this idea as her own, (“I saw an opening, and then the idea became ours.”) she is happy to reflect on her dedication to Astraea, and what led her to organize such a riveting act of collective support:

“I love Astraea because of the connections you help forge; because you fund activists in parts of the world that I can’t find on a map; and because there’s a sense of family that extends from your New York City office to everyone who comes into contact with you.

The Retreat was extraordinary. The wisdom and multiple identities of the people gathered in that room was awe-inspiring. You harnessed that energy and created a space which helped break the taboo of talking about money and class. You enabled people to deal with the complexity of that reality individually and collectively.
The Retreat also echoed Astraea’s work by setting a tone of engagement and conversation. Whether you were standing in the buffet line or asking a question in a plenary, there was an overarching sense of linking activism on a global and local scale.

People were looking to thank Astraea in an active way. We asked the Astraea staff to sit at the front of the room in order to take in this love, acknowledgement and validation — that you give to others every day. Without a doubt, everyone left that Retreat a stronger person — hopefully empowered to initiate actions like this again. If we could add more zeros to the amount of our giving, we’d see a faster revolution toward a world where social justice, peace and passion prevail.”