“Astraea was the organization that we came to because of our shared values with how Astraea puts all of their work into effect.” 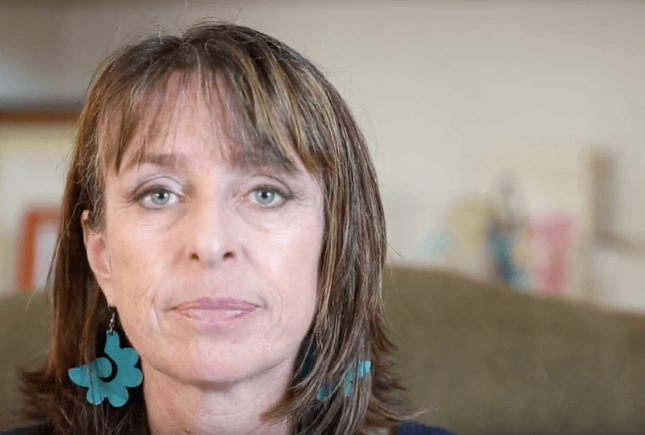 How are you connected to Astraea?

My partner and I established a fund in her name before she passed. And we’ve been donors and supporters in the past, but she passed away in January and in the years before that we were looking for a place to fulfill some promises that she had made to herself and to the community about giving half of her estate back to community organizations and social justice. Astraea was the organization that we came to because of our shared values with how Astraea puts all of their work into effect.

What were the promises that Jeanne made to herself?

Jeanne was planning to be a nun when she left high school and she had some really deeply held beliefs about making vows and setting goals and also giving back in a sense. She had created the Community Yellow Pages which was, in some ways, a very unintentionally successful business. She began it as a political action. She felt that the community had given to her and she wanted to give back. Jeanne also had a sense of being a parent and a mentor to younger generations of lesbians, LGBTI, and queer young folk. To her, they were her children and rather than leaving her estate to, as she once said very humorously, “To some random heterosexual niece or nephew that you don’t really know very well.” She felt that she wanted to leave her legacy and seed money for younger generation who were coming up behind her.

Where and when did the two of you meet? What was the first thing that you noticed about her?

That’s a funny story. We met in the fall of 1989. We met in a women’s therapy group. Jeanne was always asked, “Oh, was it a lesbian therapy group?” And she had to admit, “No.” It was actually a straight therapy group. She joined the group because she had been referred to this particular therapist who was doing work that she needed to do. She also joked that she had slept with most of the lesbian therapists in Los Angeles. She had boundary issues.

The first time we met, I had just come back from South Africa. My dad had been very ill. I walked back into the group and the group was very charming and kind… except for this one new person who was sitting there wearing a hat and boots and had completely different energy than everybody else in the group. She leaned forward very intently and looked at me and said, “Well, do you have closure with your father?” And I was like, “Who is this person and how dare she asking me such an honest, strong, clearly purposeful question?” And that’s how I noticed her.

What happened after that? How did you guys keep noticing one another?

After therapy group, all these women, or several of the women from the therapy group would go out to Marie Callender’s down the street and go for coffee. I kept noticing that me and this woman were the last two always there. We were having the most interesting conversations, we were closing down Marie Callender’s at whatever time they closed. 11:00 PM, I guess. While ordering a whole bunch of cornbread, it became clear that we were really interested in each other even though we were in a therapy group where you were supposed to not be having any kind of romantic entanglements with your fellow group members. For me, it was the fact that we started out being friends first, that was really important. I was newly coming out, and about 13 years younger than Jeanne. She was famous in the community; she had a reputation. There were lots of stories about her. It was probably better that I didn’t know any of them when I met her.

What were your shared values?

Community and giving back to something larger than yourself. We also shared values around standing up against injustice, and the importance of being a part of a movement that may change and brought people together. I think that Jeanne talked often about her work coming out of her own oppressions. I think she came out of being butch and Chicana in so many ways; different and struggling in her own family and struggling in the world. For me, I think, my attraction and connection to social justice came out of difficulties in my childhood and empathy from that that. So those combined values was always us seeing how we felt it was necessary to be of service in a way. To also step up and stand up for other folks.