This International Trans Day of Visibility, join us as we celebrate the power and vitality of Trans Movements worldwide. 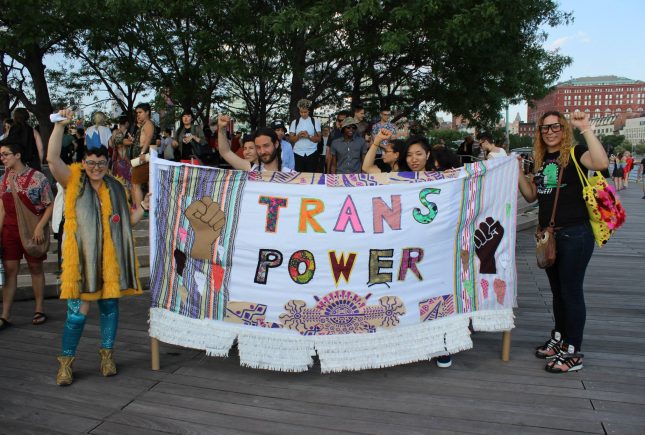 This International Trans Day of Visibility, join us as we celebrate the power and vitality of Trans Movements worldwide. Watch the video above to find out how Astraea grantee partners like Trans-Fuzja in Poland, S.H.E. in South Africa, and Transgender, Gender Variant, and Intersex Justice Project in the U.S. are seeding deep and lasting change and challenging discrimination, stigma, and violence against Trans people all over the world. Trans people face serious human rights violations in every region of the world. In philanthropy, we see that Trans groups internationally are severely underfunded—they receive less than 1% of all foundation money dedicated to human rights, and according to our recent report on The State of Trans Organizing, more than three-fifths of Trans groups worldwide have budgets of less than USD $10,000. Despite the lack of funding, Trans Movements are growing rapidly in the U.S. and all over the world—and Astraea is proud to be a longtime supporter, having supported Trans organizing since as early as 1994. Build Trans power with us this TDOV:

[Ruby Corado (Casa Ruby):] “We are here to speak for the hundreds of transgender people…”

[Ruby Corado (Casa Ruby):] Number one as a transgender woman, I experience a lot of barriers, a lot of obstacles. Many times it felt like people really wanted to delete me from the face of the earth. As I started Casa Ruby, it felt the same way. And receiving the grant from Astraea, it really says that our work is worth it. That our lives are worth it.

[Leigh Ann Van Der Merwe (S.H.E.)]: Trans women is the last population ever to be thought about. We are very invisibilized in feminist spaces. It’s like we don’t have the same legitimacy as other women to be in feminist spaces. That’s one of the reasons we started S.H.E.

[Wes Ware (BreakOUT)]: When we started, we had very little funding. We were a project of another organization and Astraea was one of our very first funders. So from there we’ve gotten Astraea’s support every year since we started.

[Jennicet Gutierrez (Familia TQLM)]: I have been working to end trans detention. We believe as an organization that uplifting the voices of the LGBT community, specifically Latino/Latina and also transgender women who have often been left out, it’s important and critical for the work.

[Wiktor Dynarski (formerly of Trans-Fuzja)]: My work in trans rights is not something that I planned from the very beginning, ’cause I was really afraid of coming out. There was almost no trans visibility. Trans people didn’t have a voice, didn’t have faces that could be identified. So it was an issue of shame rather than pride. So we as an organization try to make trans a proud thing. We have trans YouTubers now, trans vloggers. A lot of things have shifted. And I think one of the reasons for that is the huge amount of work that we did as an organization, that we pushed a lot of people to share their stories and be visible.

[Miss Major Griffin-Gracy (formerly of TGIJP)]: The only difference between now and…when I was growing up, and young girls that are here today, they at least have the opportunity to stand in their own right. The girls can go out in the daytime now. My generation could not even think about sunshine and being in a dress, that was not in the equation. And so, as things progressed and the girls, they’re getting out, and they’re jumping on buses and planes, getting their stuff. That’s a wonderful, wonderful thing.

[Ruby Corado (Casa Ruby)]: There’s a reason why you’re in this world. And if nobody tells you, you need to speak it to yourself. And I can tell you it gets better. It gets better because we make it better.