Astraea and our grantee partners recognize the power of art to create social change. Through our Global Arts Fund and threaded throughout our work, we showcase and connect art by LGBTQI people and organizations that use art as a tool for social transformation.

Astraea and our grantee partners recognize the power of art to create social change. Through our Global Arts Fund and threaded throughout our work, we showcase and connect art by LGBTQI people and organizations that use art as a tool for social transformation. Spanning multiple genres, our grantee partners’ exemplary work has been acknowledged by Sundance, the American Film Institute and the Museum of Modern Art.

Film holds a unique role in social change. As lesbian experimental filmmaker Barbara Hammer writes, “I chose film and video as a medium to make the invisible, visible… I want people to leave the theater with fresh perceptions, emboldened to take active and political stances for social change in a global environment.”

Stream The New Black on Netflix.

Directed, produced and written by Global Arts Fund panelist Yoruba Richen, this documentary offers a comprehensive look at “how the African-American community is grappling with the gay rights issue in light of the recent gay marriage movement and the fight over civil rights.” The New Black utilizes a decade’s worth of newsreel footage and features interviews with prominent Black voices from both sides of the marriage equality debate. Read more about this gripping documentary.

Founded in 2001, grantee partner Mujeres al Borde (Women in the Margins) uses cultural production and community building to promote the rights of women and LGBT communities. Mujeres al Borde coordinates the Audiovisual Regional School, Al Borde. Open to all women and LGBT people, Al Borde produces short films about LGBT activists in South America. These have been screened and awarded at 30 film festivals across the globe, including the Queer Women of Color Festival and the Venezuelan Film Festival of Diversity. Learn more about Mujeres al Borde’s mission to raise visibility through film.

Grantee partner Iranti-Org formed in 2012 to help local and regional lesbian, trans, intersex and gender non-conforming (LTIGNC) movements in South Africa and across the continent use media as a platform for mobilization and shifting public dialogue. Iranti supports organizations to document human rights violations and produce evidence-based materials, including short YouTube documentaries about violence against LGBT people in South Africa. Read about Iranti-Org’

The national consciousness about racial, economic and gender inequality has been raised by radical organizing…

Movement building has been a core commitment of Astraea’s since our inception. When other funders shied away from supporting this work thinking it didn’t yield immediately measurable outcomes, Astraea was vigilant. There is nothing coincidental about the intersections of wins and organizing we are experiencing in this country and globally: they are a culmination of years of movements building. The barrage of vitriol and violence emerging on the popular level reveals the systemic injustice that makes specific lives untenable, whilst simultaneously laying bare how ready and poised we are for a grassroots response. Police brutality and systemic injustice is not a surprise: it’s a strategy. The tectonic shift happening in the streets, on the page, virtually and literally is not a singular moment or a coincidence. It is the strategic rise of our movements. It is through this lens that we take a glimpse at what has happened (so far!) this summer.

How is this movement taking shape in the United States?

The national consciousness about racial, economic and gender inequality has been raised by radical organizing, a time that also marks the two year anniversary of #BlackLivesMatter. Our community of grantee partners, staff, donors and board members are present in those spaces because of our viable and interconnected ecosystem. Folks continue to show up in the streets to protest the continued killings of Black people by police as well as the systemic violence against queer & trans* communities of color. Grantee partner groups like SONG and Familia joined with the #Not1More campaign to release queer & trans* migrants from detention and put an end to deportations. Through the new forms of collective organizing like the #GetYrRights network, theyre working to build strong communities, promoting healing from trauma & violence and taking a stand to end harmful immigration enforcement practices.

Astraea made history recently by launching the first-ever Intersex Fund in the world. The fund is a stellar example of the power of a single investment. We secured a significant seed donation from Kobi Conaway and Andrew Owen, and a leadership gift from the Arcus Foundation, which we then leveraged to bring the Funds total to nearly $500,000. By identifying funding gaps and working in partnership with activists, we are providing essential resources to severely underfunded communities. Philanthropic advocacy in action! Our International Fund continued to support new & emerging intersectional LGBTQI activism through 131 grants in 56 countries with over $2 million. An exciting new example is our increasing support for activism led by and for LGBTQI youth. We’re funding groups like Togetherness for Equality and Action (TEA), an LBT-led grassroots group based outside of Bangkok. TEAworks with traditionally marginalized youth from Muslim and queer communities to share stories from LGBT youth, while organizing leadership programs and training in human rights data collection and analysis, social media and self-care. 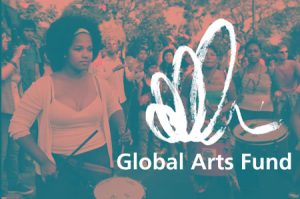 Artist-activists are imagining new tactics, strategies and visions for the world. This summer, the Astraea Global Arts Fund awarded grants to 15 artists and arts collectives who are producing work in response to criminalization and militarization in their local contexts. We are proud to build on our 37 year legacy of supporting activist artists! 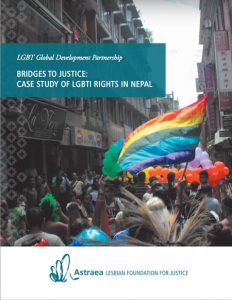 In June we released the groundbreaking research document: Bridges to Justice & Nepal Case Study. The case study sparks questions about how to encourage, research, and fund activism to improve the lives of LGBTI people globally. Over the past year and half, Astraea worked with researchers, activists, and allies in Nepal to document the powerful and creative movement-building by LGBTI people. Nepal is home to Asia’s first openly-gay federal elected official and is a global leader in implementing the Yogyakarta Principles. The recent earthquake compounds the challenges LGTBQI people face and makes the findings of the study even more critically relevant.

Reimagining the next generation of LGBTQI human rights advocacy 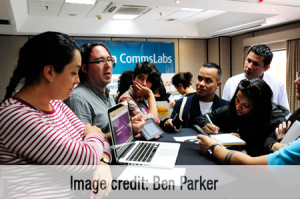 Our CommsLabs initiative continues to thrive. These gatherings are designed with, by and for LGBTQI activists, and build upon a shared vision of strengthening a network of human rights defenders and technologists working together to further LGBTQI advocacy through communications and technology. In April we held a planning workshop with local activists and technologists from Eastern and Southern Africa, to imagine and co-create the next African CommsLabs. Scheduled for November 2015. 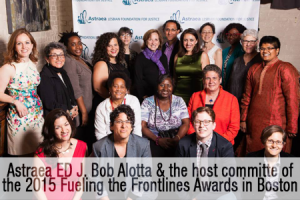 July marks the halfway point in our three year, $20 million fundraising campaign, Fueling the Frontlines. Because of your generosity and commitment, we have raised $11.2M of our total goal, enabling us to continue building and resourcing true social change. Astraea’s Fueling the Frontlines Awards, held in Boston in May 2015, went a long way toward helping us reach our financial milestone, while allowing us to recognize three extraordinary women who have furthered the movement locally and nationally: Elyse Cherry (CEO of Boston Community Capital); Daunasia Yancey (Co-leader of Black Lives Matter: Boston), and the late political scientist and author Jean Hardisty. Midway through 2015, we remain ever-vigilant in our collective insistence for gender, racial and class equality. As we take stock of our successes we also look forward to the continued work in our backyards, across nations and around the world! Come along for the ride! 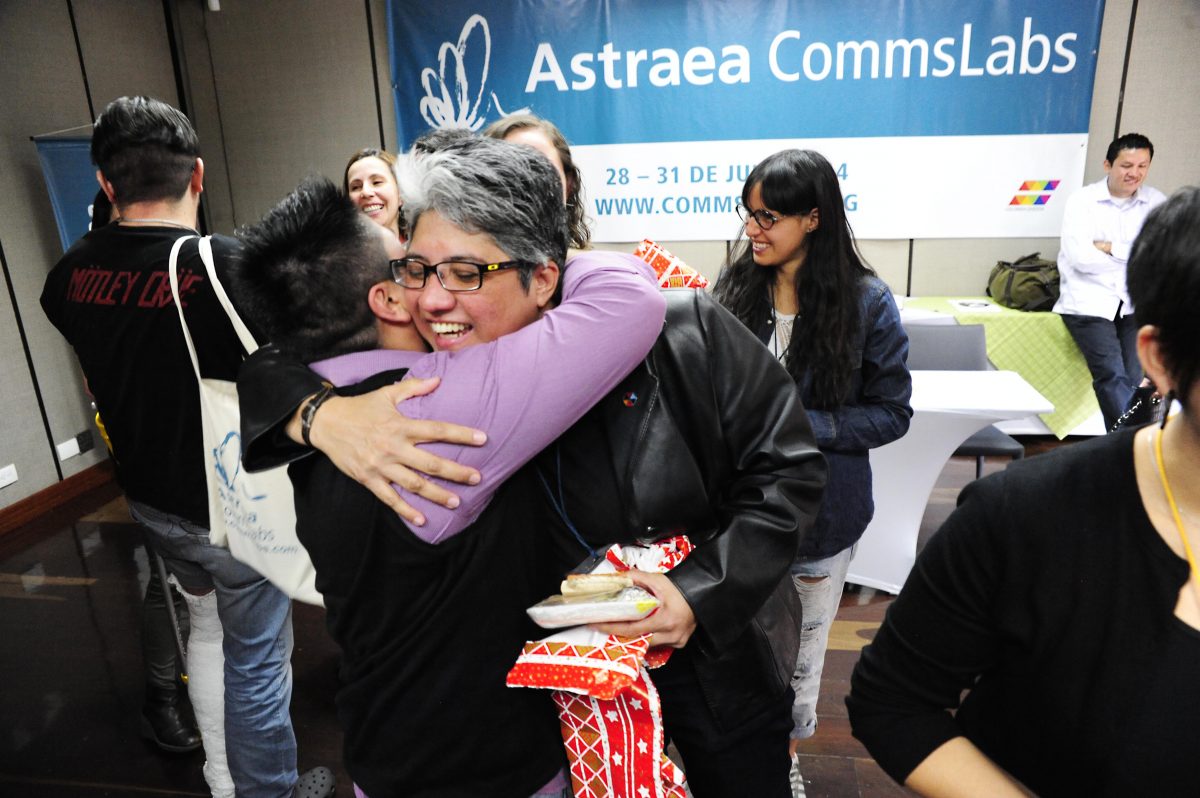 In July 2014 Astraea launched the first-ever Media, Communications and Technology Lab (Comms- Labs) in Bogotá, Colombia, as part of the LGBT Global Development Partnership with USAID. Gathering together more than 35 activists from Latin America with 12 technologists and communications practitioners from around the world, the group worked together to create new media strategies and digital advocacy tools specifically designed to meet the needs of LGBT human rights defenders.

At the CommsLabs in Colombia, Astraea grantee Red Lésbica CATTRACHAS, a collective whose main objective is to advance and protect the human rights of LGBT people in Honduras, presented their Observatorio tool. The Observatorio is a database that CATTRACHAS has used since 2008 to monitor and identify trends in human rights violations and violence against LGBT people; it works by grabbing tagged words (murder, gay, homicide, lesbian) from online newspapers and media outlets.

CATTRACHAS then follows up, opens a case and provides support with reporting and services for the survivors. Astraea grantee partners Colombia Diversa, Caribe Afirmativo and Santamaría Fundación were also present at the CommsLabs. These organizations have been collaborating with CATTRACHAS since 2011, using the Observatorio to track human rights violations in Colombia. Together they’ve built a robust system that allows them to monitor violence and hate crimes against the LGBT community. Other organizations, such as No Tengo Miedo, a Peru-based grantee partner, and Mujer y Mujer, an Ecuador-based grantee partner, learned about the Observatorio and its regional impact for the first time at CommsLabs, and have made plans to implement it in their countries. As a direct result of the CommsLabs, CATTRACHAS strengthened the Observatorio with support from one of the trainers, and was able to make it available online for other organizations to use.