An interview with Wiktor Dynarski, former Executive Director of Polish organization Trans-Fuzja, about trans organizing in Poland and what it’s meant to be an Astraea grantee partner. 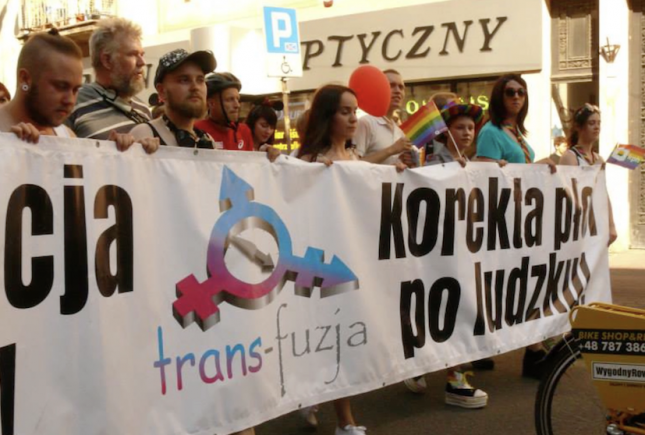 Founded in 2008, the Trans-Fuzja Foundation began as a community initiative offering peer counseling and community building activities. In the past eight years, it has grown remarkably to take on ambitious campaigns towards the achievement of legal, social, health and human rights of the full spectrum of transgender, non-binary and gender-diverse people in Poland. In 2015, their campaign to pass a comprehensive Gender Recognition Law reached a remarkable high when it was approved by the Polish Parliament, but it was unfortunately vetoed by the President. Despite this eventual defeat and the post-election conservative swing in government, Trans Fuzja continues to find innovative case-by-base avenues to make the process of legal gender recognition and access to healthcare less cumbersome for trans people.

In the video above, Wiktor Dynarksi, Trans-Fuzja’s former Executive Director, shares more about the organization’s work and what it’s meant to receive support from Astraea.

Being a trans person in Poland is an interesting experience. When we first started working on trans issues, there was almost no trans visibility. Almost every topic on trans issues was anonymous and trans people didn’t have a voice, didn’t have faces that could be identified, so it was an issue that was more of an issue of shame rather than pride. So we as an organization try to use this and make trans a proud thing.

My work in trans rights is not something that I planned from the very beginning, because I was very afraid of coming out. But I think my story could show how trans narratives in Poland have evolved because back then, back in 2007 or 2006 I would have never dreamed of coming out. Then people started coming out, talking about their issues. We have trans YouTubers now, trans bloggers, people who document their transition. A lot of things have shifted since 2008. And I think one of the reasons for that is the huge amount of work that we did, as an organization. We pushed a lot of people to actually share their stories and be there, be visible.

The government is not only homo- and transphobic but it also doesn’t oppose violence, doesn’t oppose hate speech and hate crime in any aspect, and we know in Trans-Fuzja that what we need to focus on at the moment is the fact that there’s going to be more violence in the street, and more violence… more experiences with violence for trans people in their everyday lives. We know that for now we need to be there for the people on the ground. We need to be there, we need to be responsive to trans people’s needs.

We try to focus on all the aspects of being trans in Poland because there are a lot of issues to work on and we’re the only organization currently working with trans people only. One of our work areas in advocacy is actually something that we call self-advocacy, or the ability to self-advocate, which means that once our support groups and our experts give you the tools, give you the power to advocate for yourself, you are actually able to do that. If you have the motivation, if you have the power, you can actually argue for your own cause. We really want trans people to feel that kind of power, to feel that they are able to do things on their own, and that they don’t have to have an organization working for them, but an organization that works with them.

It is very important first of all that grantmakers realize that in some cases it is almost impossible to do advocacy work. And we need to focus on supporting people on the ground. Which is something that we have been very thankful to Astraea, who gave us an operational grant that is able to pay for legal aid that we provide in Poland, as well as a coordinator who would be able to work with all these activities that are growing because of the fact that people need them. So in this particular aspect, the support that we got from Astraea was exactly on point and exactly in the time that it was needed.