Forging coalitions and leading the resistance

Today, Astraea is among the top five funders supporting organizations fighting criminalization—and we could not have reached that point without your support. 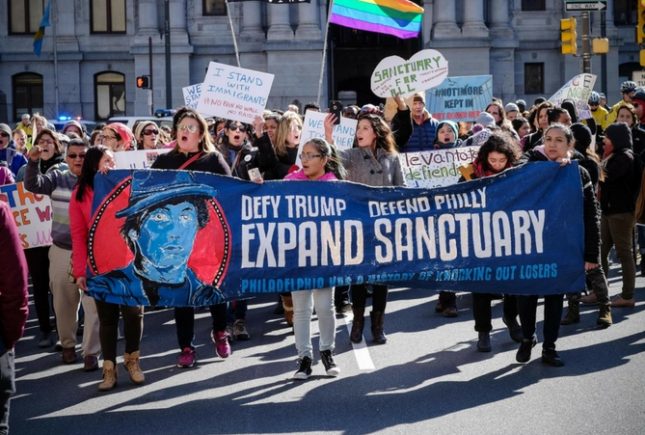 Can a body ever be free if it is being policed or if its movement is restricted by borders and discriminatory social norms? In the U.S. these bodies are overwhelmingly black and brown—60% of the 2.2 million people currently incarcerated are people of color.

While the totalitarian Right are determined to criminalize our bodies, keeping us divided and pitted against each other, Astraea’s grantee partners are coming together, forging coalitions that resist oppression. They’re building movements across borders and issues, working on community-based strategies to increase safety and end multiple forms of violence affecting LGBTQ people of color.

In the words of early Astraea grantee partner and juror, Audre Lorde, “Militancy…means actively working for change, sometimes in the absence of any surety that change is coming. It means doing the unromantic and tedious work necessary to forge meaningful coalitions, and it means recognizing which coalitions are possible and which coalitions are not. It means knowing that coalition, like unity, means the coming together of whole, self-actualized human beings, focused and believing, not fragmented automatons marching to a prescribed step. It means fighting despair.”

For 40 years we have been doing just that, by funding at the intersections of LGBTQI rights and the fight for freedom from violence and criminalization: one of our very first grants went to a project supporting incarcerated lesbians of color in prison. Our recent round of U.S. grants supports 33 LGBTQI organizations with over $1 million working to resist criminalization and demand fair immigration policies.

For example, Mijente and Black Youth Project 100 are leading a campaign to expand the conversations around keeping our cities safe by ensuring they are Sanctuary Cities and elevated beyond immigration-specific protections which are limited to municipalities. Together they’re finding creative ways to reduce current enforcement policies and challenge detention, deportation, criminalization and policing of immigrant, refugee, Black, and trans communities. Due to the collaborative’s work, they recently passed a local ordinance eliminating the use of ICE holds by police. They’re also working to end the use of the Chicago Gang Database, an unconstitutional tool that targets US-born immigrant communities of color.

Similarly, grantee partners Enlace, Black Alliance for Just Immigration and Ella Baker Center are working together to build #FreedomCities, a multifaceted campaign that strives to generate tangible and lasting policy change, like the protection of LGBT communities, equal pay, fair housing, and policing reform. Together they are fighting for safe, healthy and thriving neighborhoods and local communities.

Today, Astraea is among the top five funders supporting organizations fighting criminalization—and we could not have reached that point without your support.

Join us in continuing to fuel the movements on the frontlines of the fight for LGBTQI justice, by contributing to the Uprising of Love Fund.