Digital Security and Decolonization: Astraea’s CommsLabs in the Dominican Republic

In September 2018, Astraea hosted our 4th CommsLabs in Punta Cana in the Dominican Republic. Read more about it below! 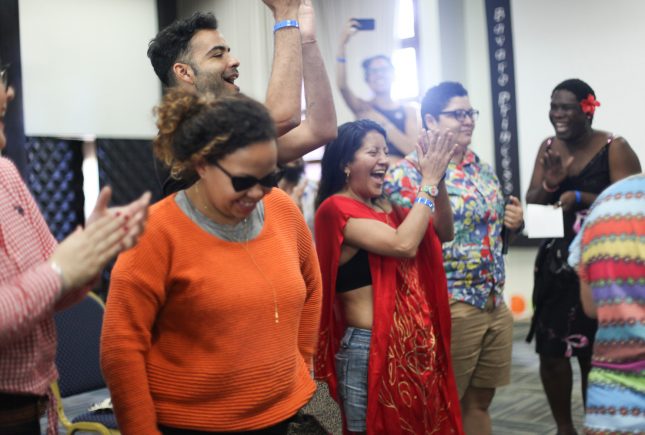 As LGBTQI activists working in extremely challenging environments, we don’t always have the time to sit down and think about our communication strategies, let alone have conversations with other organizations about shared concerns, achievements, struggles, what works, and what doesn’t. CommsLabs has given us the space to keep hope alive and maintain our heads above the water.

In September 2018, Astraea hosted our 4th CommsLabs* in Punta Cana in the Dominican Republic. Co-designed and co-facilitated by grantee partners from Latin America and the Caribbean, it was an opportunity for LGBTQI+ activists from all over the region to build capacity, experiment with new tools and technologies, and intentionally connect with each other both within and across movements to break down the structures of racism, patriarchy, and colonialism.

CommsLabs convenings like the one held in the Dominican Republic link technology training to grassroots organizing supporting participants to strengthen technology skills, skills-share with one another, and connect the physical and digital organizing spheres, ultimately building collective power. Yet, CommsLabs is about more than just connecting activists with the technologies of now and of the future – the convenings are structured in such a way that they create spaces for organizers to rest, rejuvenate, reflect, and recharge.

Over three days, activists attended workshops and trainings on issues ranging from holistic security to strategic communications, and effective campaign-building. These sessions brought together 20 activists from the Dominican Republic, 3 from Puerto Rico, and 2 from Guatemala, to work together to build creative messaging and develop their organizing tactics, as well as discuss the particular challenges they face. The group also included eight feminist and queer Latin American organizers and trainers.

CommsLabs are co-created with grantee partners, who are a part of the process from the initial strategy meetings to the regional tech assessments , as well as designing the tracks, and identifying trainers and facilitators. For Brenda Salas Neves, Program Officer at Astraea, the involvement of grantee partners from the country and the region in the design and strategy stages is critical. “CommsLabs has to be rooted in the community and local priorities in order for it to work. We worked with trainers from the region and local grantee partners to create thoughtful programming that reflected the political and social priorities of grassroots activists within the region. As funders, our role is to center the needs of our grantees, and to provide support and solidarity, acknowledging the power that we hold, by sharing that power and helping to create as participatory an environment as possible.”

Finding ways to keep hope alive is critical for activists whose bodies, identities, and lives are on the line everyday. A unique healing space known as Siesta Negra was set up for activists to reground themselves in the midst of the convening. Siesta Negra was led by facilitator Jeannetee Tineo, who was inspired by an art exhibit held in Madrid under the same name, by queer feminist Afro-Latino-American artist duo niv Acosta and Fannie Sosa. The space included a collectively created altar which had spiritual symbols, names of people the group wanted to commemorate, and a map of the Caribbean. Opening and closing rituals – influenced by Yoruba and other Caribbean practices – took place there everyday.

Siesta Negra provided an opportunity for activists to go beyond digital security to address the threats to their personal safety and well-being by utilizing healing justice frameworks and self-care techniques. “By recovering ancestral technologies and practices, and utilizing them simultaneously with current ones, we can build in a context more accurate to our own geographies. I truly believe that these ancestral practices can also guide our actions toward more successful outcomes. Rather than glorifying stress, over-work, and sacrifice, we can bring back better self-care practices that will then allow us to remain stronger and better connected with each other,” said Tasmy from grantee partner CMS.

In other sessions, activists had the opportunity to have open dialogues on often ‘taboo’ or silenced subjects such as the effects of racial dynamics and anti-blackness across the region, or the specific challenges and threats faced by trans folks, even within the LGBTQI+ community. Facilitators held conversations about race in the Caribbean, creating space for people to share personal experiences around discrimination and rights. The conversation aimed to give participants an opportunity to collaboratively respond to the challenges they face, and envision possible solutions and strategies for fighting back against violence.

With digital and online campaigns comprising a major component of organizing today, the convening combined these dialogues with workshops where activists shared software, online tips, and expertise – leaving the convening with fresh ideas, skills, and tools.

* Astraea’s CommsLabs is a radical global movement-building initiative that equips LGBTQI activists with the tools, skills and knowledge they need to securely organize and advocate in online spaces. Through a series of regional or country-based convenings, each Lab connects local LGBTQI activists, trainers, healers and technologists in an effort to address the online and offline threats facing LGBTQI communities, and seize the opportunities technology presents. To date, we have held four convenings: two in Africa, and one each in Colombia and the Dominican Republic, and a forthcoming convening is planned to take place in the United States in 2019.

Learn more about the convening in our video below: