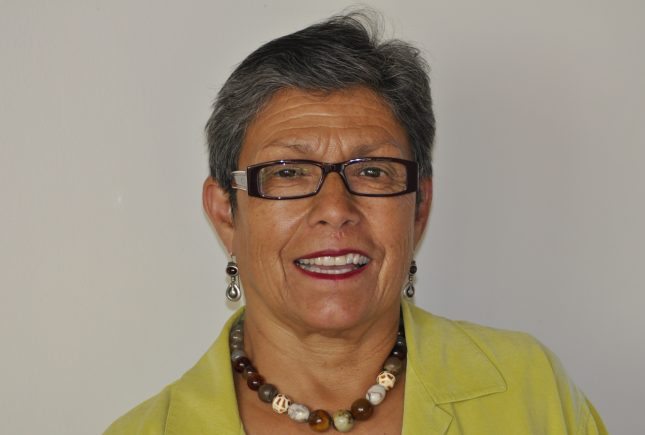 Eleanor Palacios, now retired, lives in San Francisco where she continues her activism by volunteering for The Chicana Latina Foundation, OpenHouse, and Puente de la Costa Sur. The Chicana Latina Foundation is an organization whose mission is to empower Chicanas/Latinas through personal, educational, and professional advancement. OpenHouse provides housing, services, and community programs for LGBT seniors. Puente is a resource center on the South Coast that provides services for the farmworkers and their families. In 2003, Eleanor joined the Board of the National Center for Lesbian Rights, transferring over as an employee, to Events Manager, three years later. She continued her position at NCLR until 2013. In 2002 when the San Francisco LGBT Center opened its doors, Eleanor quickly volunteered once a week at the reception desk. It was at this time that she saw a need for more LGBT Latinos to get involved in this new Community Center. She along with 3 friends founded the Latino Forum, a space for LGBT Latinos to meet and gather, plan social events, and be a part of this new Center. The Latino Forum continued for 3 years, with special celebrations promoting Cinco de Mayo and Dia de los Muertos. Also in February of 2002 under the name of Lady Iguana Productions, Eleanor produced and created, Riquisimo, an all-Latina lesbian review of comedy, music, spoken word, art, and dance performance. She also served on the board of Astraea between 2009 – 2011. From 1992 until now, Eleanor has also worked part time for Olivia Travel.

Your activism has spanned the decades. Can you tell us about your work with the San Francisco LGBT center, and what it meant to create a space for Latinas and Latinos specifically?

My first involvement with the Center began when it first broke ground. I was one of the Founders, one qualified by donating a certain amount. The Community was quite excited about having a new Center. Since I lived a couple of blocks away I knew that I would volunteer and I did. One evening a week I was at the front desk, answering questions or referring people to the various programs available. After about 6 months it became apparent that not too many Latinos were coming into the Center. It took a few of us to start doing some outreach, we put the word out and soon we had people showing up to our monthly Latino Forum. The Center provided the space and encouraged our participation. At the height of the Forum we had close to 100 people showing up. It was wonderful to have a space where we could discuss our issues.

You have been described as a “madrina”, a godmother to young Latina women who were coming out. Can you tell us a little bit about what that means for you and why mentorship is such a critical part of your work? Did you have mentors as a young lesbian activist?

I did not have mentors when I was younger so I think that is one reason why I think it is so important to provide mentorship as I look back and wish I had. Today I have a lot of young friends, some 10, 15 and 20 years difference. I love the fact that we can have these intergenerational relationships. I learn a lot from these young women and I know they learn from me.

What are some of the specific challenges you see facing Latina lesbians and queer women today?

I think the biggest challenge today is surviving our current political state. It is hard enough being a woman in today’s world, you then add the factor of being a woman of color and lesbian, it just means you have to work that much harder, be more tenacious and be ready to resist.

What does it mean to you to be nominated for the Astraea Acey Social Justice Feminist Award honoree?

I felt honored and thrilled that I was considered and especially that it is in Katherine’s name.