This TDoV, we must challenge the societal constructs that have conditioned us to view trans people as unworthy of support and care. Building the  leadership and visibility of Black and other marginalized trans people is critical for creating transformative change. As feminist funders, we believe our role is to honor the visions of trans people and to invest in those visions over the long-term. 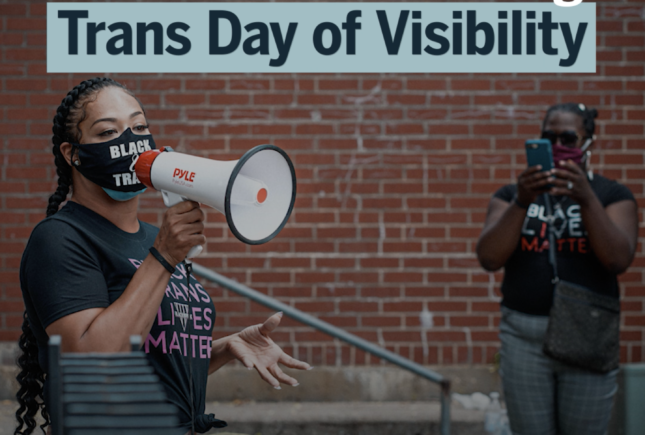 This Transgender Day of Visibility (TDoV), Astraea celebrates the power and resilience of trans movements worldwide, simultaneously recognizing the need to continue resourcing trans futures. Transgender activist and founder of Transgender Michigan, Rachel Crandall-Crocker started TDOV in 2009 as a complement to Trans Day of Rememberence (TDoR), an annual event memorializing those who have been murdered as a result of transphobia. She hoped to instead create an event that highlighted the unique and often understated achievements of the trans community. TDoV was created precisely because supporting and rejoicing in transness is so rare.

Here are just some examples of how our trans grantee partners have been building power for and prioritizing collective care for their communities:

As funders, we must challenge the societal constructs that have conditioned us to view trans people as unworthy of support and care. Building the  leadership and visibility of Black and other marginalized trans people is critical for creating transformative change. As feminist funders, we believe our role is to honor the visions of trans people and to invest in those visions over the long-term. Our responsibility is to keep shifting resources into the hands of trans-led organizations, understand what their needs and priorities are, and build their collective power.

At Astraea, we are 1 of only 2 funders in the world giving more than 10% of our funding to trans-led groups.

26% of our grants supported TGNC-led organizing and 100% of our TGNC-led funding in the U.S. was for groups led by and for people of color.

Many trans people around the world face a grim decision regarding visibility in an era where modest gains for trans rights coexist globally with rising far-right reactionary backlash. This can be particularly difficult for newly-out and younger trans people or those just beginning to fully embrace the complexity of their identities, as they attempt to navigate the challenging and uncertain terrains of being visibly trans. We value every transgender and gender non-conforming person, so while visibility is to be celebrated (and especially so on TDOV), it is essential that it not be misconstrued as the only measure of authenticity.

As we continue to be impacted by this  global pandemic, we have witnessed how COVID-19 has continued to have a disproportionate and devastating impact on trans communities globally, especially on those who are more visible. As communities that already face systemic discrimination and violence, are often unable to access healthcare, housing, and economic opportunities, and whose human rights are either at grave risk or denied entirely in several countries, trans people have been marginalized time and time again. For trans folks, the isolation measures set in place around the world during the pandemic have made life difficult: everyday microaggressions and obstacles have been amplified, access to life-saving resources and necessary healthcare services are often cut short or unavailable, and physical support systems and networks are often out of reach.

All these barriers are exacerbated for trans people living at the intersections of race, class and ability. When people talk about Black Lives Matter, not all Black lives are necessarily valued equally. This is especially true when it comes to Black trans people, who are killed and incarcerated at disproportionate rates and are commonly erased within power structures and ecosystems across society, from the broader Black Lives Matter movement to entertainment media. In June 2020 – during a summer of uprisings against police brutality and systemic racism against Black people – a Black Trans Lives Matter rally was organized, led by, and centered Black trans women, honoring Dominique “Rem’Mie” Fells, 27, of Philadelphia, and Riah Milton, 25, of Cincinnati, Ohio who were brutally murdered. The march and rally gave trans and gender non-conforming people the opportunity to mourn lives lost, and to convey their resounding calls for justice, fair treatment and access to greater resourcing.

We are in a moment of global resistance and reckoning. Trans communities are pushing back against white supremacist, capitalist, and patriarchal systems, and demanding pivotal change that will ensure a safer future for us all. It’s well past time we trust trans people and honor Black trans leadership. Speak out and act against violence against trans people. Fall back and let trans people lead. Invest in trans-led organizations, campaigns, and ideas. Fund trans communities intersectionally, across issue areas, movements, and geographies. Amplify trans realities and narratives in nuanced and expansive ways. Against all odds, through times of crisis and times of joy, it is our collective responsibility to shift power and resources so that trans people thrive.

This Trans Day of Visibility (TDoV), we are also delighted to have collaborated with artist M (who creates under the name, Emulsify) to create the beautiful illustration you see below titled “Trans People Deserve to Bloom!” M is a brown genderqueer cultural worker and organizer. They create art that helps them heal, learn, advocate, and imagine new worlds. M is a trained abortion doula, founder of Emulsify Design, and creative director of Arrebato, a space for Queer Trans Black & Brown community. They believe all art is powerful and political. As Astraea, we are committed to supporting artists and their work, recognizing that art is an essential tool for social transformation. 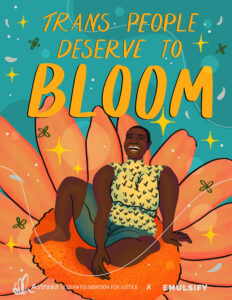