Astraea’s statement on the U.S. Department of Health and Human Services memo released by the New York Times on October 21, 2018. 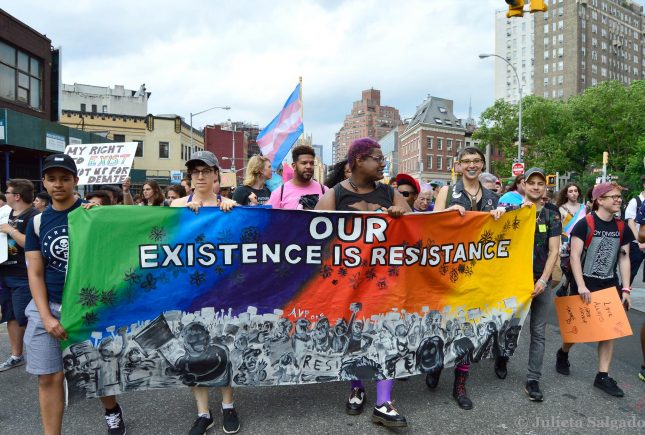 Trans people are not an aberration.
Intersex people exist.
Non-binary folks will not be silenced.
We will not be legislated out of existence.

The identities, bodies, and lived experiences of trans, gender non-conforming, and intersex people are not up for debate or political opinion. They are a fundamental part of our lives and our liberation. ALL people are entitled to the protection of basic human rights; to live and thrive without having our bodies and existence threatened and questioned.

The recent U.S. Department of Health and Human Services memo tries to establish a retrograde definition of “sex” as unchangeable and either “male” or “female”. It is an attempted erasure of the very existence of trans and non-binary people, and intersex people whose sex characteristics do not neatly align as “male” or “female.” The very fact of it incites intolerance and hate crimes towards those who are different and threatens their access to employment, housing, education, and healthcare. It is an attempt to create ideological schisms and use the double speak of “irrefutable” science while cutting all funding to and otherwise undermining actual science and lived experience, leaving those who are already marginalized even more vulnerable.

In the United States and around the world, the right-wing ‘gender ideology’ campaign has deliberately misrepresented queer and feminist politics in order to justify discrimination against LGBTQI people.Right-wing fundamentalists and populist leaders are using thiscoded doublespeak, alongside white supremacist rhetoric, to delegitimize populations’ right to equal protections under the law, to public resources, and social policies. This is a strategic maneuver to grab power, money, and natural resources at the expense, demise and criminalization of trans, intersex and gender non-conforming people, women and people of color. It is a red flag far beyond our community. They are banking on gender panic to mobilize a culture war to disguise their populist takeover. They would have us believe that we do not belong nor should we exist.

But we exist. We have always existed.

As feminist funders, Astraea grounds ourselves in a political identity that demands inclusivity, challenges oppressive norms, and centers those who are most marginalized, and most at risk. We exist to shift power and resources to those who are literally fighting for their lives. We will not stop.

Fascism is not slowing down, and neither are we. We are protesting from Washington Square Park, NY to D.C. We are registering to vote in numbers. We are defending one another physically, emotionally, and financially by turning our anger into action, by showing up and resisting colonial cisnormativity and heteronormativity, patriarchal forces that would have us erased.

Will you stand with us on the right side of history and build a safe, loving and life affirming future for all people? Do what you can do in this moment.

We exist! Stand up. Show up. Fight Back. Win.

Some ways to get involved: