To Transform Policing, Philanthropy Must Support Efforts to Abolish It

If philanthropy wants to have a genuine impact on the fight for racial justice, we need to fund grassroots abolitionist movements and resource them well. 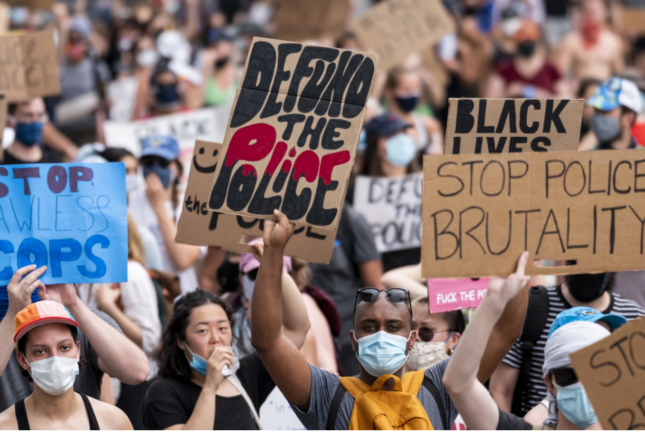 Derek Chauvin’s guilty verdict last week in the murder of George Floyd brought momentary relief — and finally some accountability. Yet this is just the beginning of a long journey toward ending police brutality in the United States and bringing about true justice. For philanthropy, now is when the real work starts.

Foundations have rallied in support of racial justice this past year, but are we really any closer to understanding what it will take to dismantle systemic racism and white supremacy? Are we putting our dollars into the organizations that will get the work done and that are leading the charge against racial injustice in communities nationwide?

Either out of misunderstanding or ignorance, most foundation leaders remain uncomfortable with the ideas pushed by activists at the forefront of the racial-justice movement — specifically their calls to abolish modern-day policing and dismantle the prison industrial complex.

What exactly do we mean when we talk about abolition? In its organizer’s tool kit, the national grassroots group Critical Resistance defines abolition as “a political vision with the goal of eliminating imprisonment, policing, and surveillance and creating lasting alternatives to punishment and imprisonment.” Abolitionist activists such as Angela Davis note that the movement is not exclusively concerned with abolishing unjust systems but is about re-envisioning how we want to live in the future — about building anew.

Many people wonder why revamping policing isn’t enough, why we should abolish policing entirely. The human-rights lawyer Derecka Purnell put it this way in an op-ed for the Atlantic: “Policing is among the vestiges of slavery, tailored in America to suppress slave revolts, catch runaways, and repress labor organizing.”

Proof that the system doesn’t work is all around us. Since the start of Derek Chauvin’s trial on March 29, more than three people a day have died at the hands of law-enforcement officers. Duante Wright, Adam Toledo, and Ma’Khia Bryant are just three of them.

Over all, Black people are more than three and a half times as likely to be killed by police as white people are. Black Americans represent 33 percent of the country’s prison population, despite making up only 12 percent of the adult population. As a whole, Black, brown, Indigenous, migrant, and LGBTQI people are far more likely to be victims of police violence. For example, a 2019 report from the National Center for Transgender Equality found that more than 58 percent of trans people who interacted with law-enforcement officers in the previous year reported being harassed, abused, or otherwise mistreated by the police.

In a recent report, Technologies for Liberation: Toward Abolitionist Futures, my organization, the Astraea Lesbian Foundation for Justice, highlights the critical questions today’s abolitionist movement poses: What resources were not available to communities that led to relying on government for a sense of safety? What resources do communities need to build and sustain safe, healthy alternatives to policing that are based on individual well-being rather than violent punishment? What community-led solutions would eliminate the need for technological surveillance tools that criminalize people of color and LGBTQI individuals, including police body cameras, security cameras, and facial recognition tools?

If philanthropy wants to have a genuine impact on the fight for racial justice, we need to fund grassroots abolitionist movements and resource them well. These movements are building alternative solutions to policing and creating tools and technologies that shift responsibility for public safety away from government and into the hands of community organizations that understand what works. Their goal is not to remove safety and accountability mechanisms by abolishing the police and prison system but rather to ensure mechanisms are in place that address real need and build trust.

As foundations continue to support racial-justice work, they should ask themselves whether their funds will actually create the systemic change they are seeking. Are their grants going to groups challenging existing systems of criminalization rather than those simply calling for piecemeal improvements? Will their dollars help curtail the expansion of technological surveillance by law enforcement or reinforce narratives promoting the false notion that these tools protect communities?

Grant makers should take the time to examine the critical work abolitionist groups have done for years with little support. This includes organizations such as the Stop LAPD Spying Coalition, which led a successful, hard-fought campaign to eradicate Chronic Offender Bulletins used by the Los Angeles Police Department to track so-called persons of interest in low-income communities of color. The bulletins were part of an LAPD program that relied on algorithmic data to predict where crimes would occur and identify individuals most likely to commit a violent offense.

The coalition sued the LAPD to stop the practice. A resulting audit of the department’s predictive policing practices found that nearly half of those “chronic offenders” appeared to have zero history of violent crime. In August 2018, the department suspended its use of Chronic Offender Bulletins.

But the coalition’s goal wasn’t only to end a harmful policing practice — it was to redirect funds that had supported the predictive policing program into community efforts that “promote real public safety.” That includes investments in public housing, education, health centers, youth development, healthy food, and steady employment.

Another group, Solutions Not Punishment Collaborative, a Black trans-led nonprofit in Atlanta, similarly works to halt problematic policing practices and replace them with something better. The group observed that cameras with enhanced surveillance capability mounted on police vehicles led to more arrests of Black residents. In response, the nonprofit worked with the city to create a pre-arrest diversion program so that those who were frequently stopped by police could avoid arrest and detention and receive supportive services instead. Since the program began in 2017, 130 arrests have been diverted, according to program organizers and the city officials who worked with them and tracked the arrest data.

The collaborative also worked with Women on the Rise, a sister organization led by formerly incarcerated women, to close down the Atlanta City Detention Center. In line with the abolitionist vision of shifting resources away from criminalization and toward community solutions, the groups are currently working to repurpose the former jail into a community space.

Funding forward-looking work of this kind requires long-term investments that center the knowledge, vision, and expertise of movement organizers. Grant makers must ask these community leaders what they need — and then help them get there. That will require forgoing traditional funding approaches that segment resources into areas such as racial equity, criminal justice, or technology.

Instead, grant makers need to recognize that these issues are deeply interconnected and then find innovative ways to support abolitionist movements that are doing the long, hard work of reimagining and building a future that is safe and just for all.