The Power of Community

Astraea is thrilled to share that in just six months, the Ellie Conant Fund raised over $19,000 from more than 200 people! 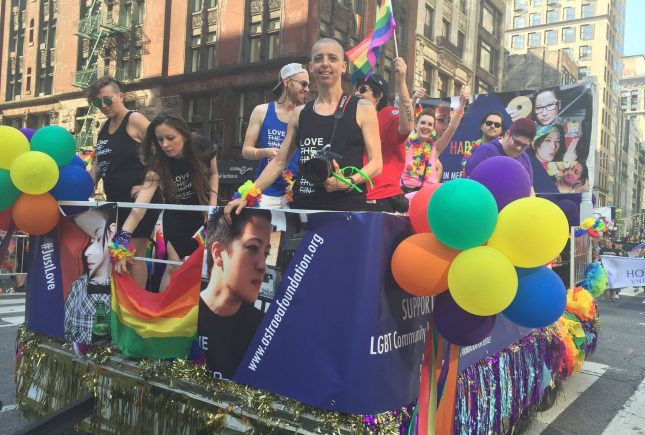 Astraea is thrilled to share that in just six months, the Ellie Conant Fund raised over $19,000 from more than 200 people! This is a testament to the love Ellie shared with her community of friends and chosen family, and to the strength of her vision to create a better future for LGBTQ youth in Korea.

The Fund will be instrumental in supporting and creating a future where the lived reality of Korean LGBTQ youth is one filled with safety, care and love! Something Ellie would have been proud of. – Bridget de Gersigny, Astraea’s Director of Communications

A legendary New York City queer scene party promoter and activist, Ellie passed away earlier this year. Through the Fund, which closed in June 2016, Ellie’s incredible work as a youth leader at the Korean American Adoptee Network and a promoter of late-night queer safe havens will continue to inspire others and bring support to those at the intersections of Korean and queer identities.

This NYC Pride, Melissa Saks, Ellie’s fiancée, and some close friends organized the #JustLove Float fundraiser in her honor. Adorned with an arc of rainbow balloons and brought to life by a vibrant team of friends and organizers, it was a powerful tribute to the love Ellie inspired and cultivated in others during her lifetime and beyond.

Words cannot fully express my gratitude for the tremendous outpouring of love, generosity and support the Ellie Conant Fund has received. It gives me such peace to know that LGBTQ youth in Korea will have new resources in Ellie’s memory thanks to the network that Astraea will help create. There can be no greater tribute to Ellie than to spread more love into this world. I will never forget the experience of creating and riding on float in her honor; we all felt her spirit there—dancing and singing and celebrating Pride along with all of us. My endless thanks to every single person who helped make this possible. – Melissa Saks

Astraea is enormously grateful to those who donated to the Fund, purchased Ellie’s signature ‘Love’ t-shirt, and supported the organizing of both the Fund and float. Special thanks goes to Melissa Saks and Martha Crawford, for their vision, energy, and enthusiasm, in making this dream of Ellie’s come true, and for partnering with Astraea to ensure her legacy extends as far as Korea.

Ellie lived a life so full of generosity and humility that she had no idea that she had a legacy. To see her amazing spirit continue to inspire the generosity of others and create safe spaces means so much to those whose lives she touched. – Martha Crawford

Sadly, the Ellie Conant Fund is now closed. However, Astraea’s commitment to LGBTQI human rights at home and abroad is perennial. Subscribe to our mailing list to learn more.