Honoring and Uplifting the Resilience of Trans Communities this #TDOR

The best way to honor trans lives is to disrupt anti-trans violence, uplifting the resilience of trans communities, their diversity, brilliance and generativity, and supporting the work of trans activists on the frontlines. To do that, we must resource trans communities. 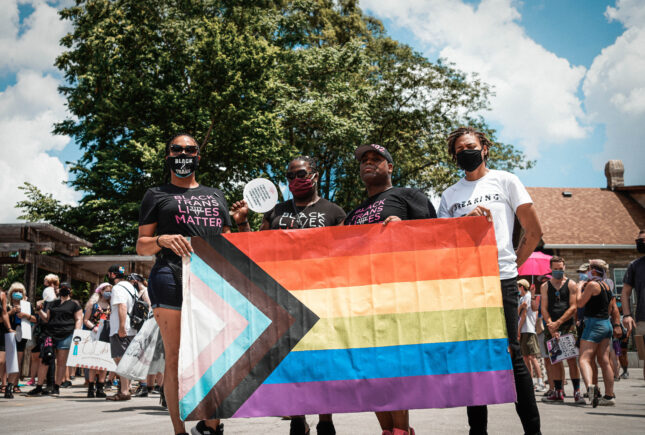 This Transgender Day of Remembrance (TDOR), we honor and hold close the trans and gender nonconforming people who have been lost to senseless violence. What began as a way to memorialize the death of Rita Hester, who was murdered on November 28, 1998, has grown into a global moment to highlight the violence trans communities still face today.

Trans people have always existed. However, the contributions of Black trans and gender-nonconforming folks like Marsha P. Johnson, Miss Major, and Zazu Nova have been largely ignored. Social justice movements have also often ignored the impacts of transphobia on trans communities, particularly Black and Indigenous trans folks, including epidemic levels of violence, heightened levels of unemployment and disproportionate levels of educational and health barriers.

The best way to honor trans lives is to disrupt anti-trans violence, uplifting the resilience of trans communities, their diversity, brilliance and generativity, and supporting the work of trans activists on the frontlines. To do that, we must resource trans communities to organize for fair healthcare, increased economic opportunities, safe housing, and gender-affirming education.

As funders, we also need to acknowledge that incremental approaches to movement building that prioritize certain identities over others are doing a disservice to trans communities, especially to Black trans women. There can be no Black Lives Matter without centering the needs of Black trans women.

How can funders show up for trans and racial liberation?

Developing political education curriculums within funding institutions is critical to reducing the harm trans people of color face. Funders need to apply an intersectional and holistic social justice framework as they confront the disproportionate levels of violence that plague trans communities worldwide, acknowledge that the state and the prison industrial complex are the main perpetrators of harm, and work to address that harm.

As funders, our role is to support and resource trans communities, rather than lead or define the goals of the movement. We must bolster trans people’s work, but never take credit for it. Our funding decisions ultimately have real-life consequences for trans people.

In order to shift power, it is crucial to trust and support grassroots trans leadership. Groups should have the freedom to choose how to use their funding and develop their own agendas, strategies and financial structures based on their own needs and priorities.

Thoughtfully assemble a geographically diverse, intergenerational, multi-ability, multi-racial panel of trans individuals to review applications and select grantees and award amounts. Trans people are the experts of their own lives and experiences–they are the most qualified to make decisions with and for their communities.

Some of the most radical, transformative social justice work is being done by trans-led groups, especially those who are stifled by class and racial barriers. It is imperative to intentionally commit to multi-year funding for these groups to support them long-term.

The events of the past couple months have created new space for funders–Astraea included–to rethink our roles in the larger social justice ecosystem. As important as recent shifts and recognition of trans people, especially Black trans women, have been, we funders still have an incredibly long way to go.