#QueersMakingHistory and the Collective Power of Our Movements

While LGBT History Month has primarily focused on highlighting exemplary ‘LGBT role models,’ we believe that collective power and organizing, not efforts by individual leaders alone, have brought about the radical transformations our movements have been witnessing in the past few decades. 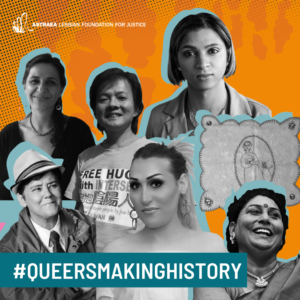 October is LGBT History Month! Originally conceived in the United States in 1994 (and since adopted by other countries who have selected different months), this month has evolved to become a time dedicated to recognizing pivotal moments in the histories of LGBTQI+ people and movements across the world. Encompassing a number of historically relevant days like International Lesbian Day and Spirit Day, the month of October is positioned to remind both the LGBTQI+ and wider communities of important roles LGBTQI+ people have played in creating and changing the social, cultural, legal, and political realms that we live in today and which so many of us may take for granted.

While LGBT History Month is meant to celebrate queer people’s accomplishments, it has also become increasingly clear that the commercialization of LGBTQI+ communities’ identities under current systems of capitalism has come to dominate the narrative and conceals some of the critical organizing work, priorities, and visibility of our movements. Much has been written about the development of “Pink Capitalism”, the deliberate incorporation of the LGBTQI+ community and movement into a capitalist market economy. The commodification of social justice efforts along with the rise of the LGBTQI+ “influencer-activist-leader” and political engagement on social media have also begun to create oppressive individualist cultures and elitism within social justice spaces. Yet at the same time, violence against LGBTQI+ communities has also escalated due to the rise of anti-gender ideologies, transphobia, and terfism particularly for those who exist at the intersections of race, class, ability, sexuality, age and gender. Furthermore, the global COVID-19 pandemic has further exacerbated injustice and inequalities, particularly for oppressed communities.

At Astraea, we understand that for many communities, there have been incredible individuals who have instilled hope and systemic change for LGBTQI communities within their respective regions as well as globally. While LGBT History Month has primarily focused on highlighting exemplary ‘LGBT role models,’ we believe that collective power and organizing, not efforts by individual leaders alone, have brought about the radical transformations our movements have been witnessing in the past few decades. Appointing specific individuals as leaders of a particular LGBTQI movement, when that movement has actually been nurtured by hundreds or thousands of people who have vastly diverse needs and priorities, takes away from the collective solutions and care work that local organizers are incubating and implementing every day without public recognition.

It is also vital for us to consider how compromised digital security and threats of physical harm and destruction can affect entities who are marginalized within the larger LGBTQI community itself. As a result, many groups need to organize anonymously due to their country or region’s prevailing efforts towards criminalization of non-normative genders and sexualities as well as attacks on civic space. The impact of such grassroots collectives operating largely underground has often gone unrecognized despite their critical contributions to their communities in contrast to groups operating visibly and with greater recognition in relatively safer environments. The contributions of groups who do not get their share of limelight due to security concerns are immense – they often are the first to build intentional communities, create safer spaces, and bring about shifts in culture and behavior. They serve as vital components of a strong movement infrastructure, and funders and advocates need to identify ways to uplift their legacies.

LGBTQI history is tied to so many of our current struggles to upend the deeply entrenched legacies of colonization and genocide that continue to harm our lands and our planet. Since Astraea’s inception in 1977, we have witnessed the ways that individual leadership in a movement can obscure the invisibilized contributions of generations of frontline activists, which can in turn, compromise our collective liberation. As a result, we have always funded and resourced grassroots groups rather than individuals alone. Given this context, as part of our #QueersMakingHistory social media series this October, we have chosen to uplift LGBTQI individuals with limited means from the Global South, all of whom have demonstrated the true power of working together through forming coalitions and alliances. This LGBT History Month, we seek to uplift the emancipatory impact of ‘leader-full’ movements where everyone is considered a leader in their own right and is empowered with the required tools to become effective organizers. And most importantly, we know that when we move collectively, we are truly powerful.

Jeanne Córdova: Jeanne is a Chicana second-wave feminist lesbian activist and proud butch who has been instrumental in shaping U.S. based gay and lesbian rights movements for many decades. Jeanne has been Astraea’s friend for a number of years. Before she passed away in early 2016, she proclaimed, “It is wonderful to have had a life’s cause: freedom and dignity for lesbians,” and announced that her estate would donate $2 million to Astraea to carry out just that goal.

Hiker Chiu: Hiker is a senior Asian intersex activist who has been a pioneer of the intersex human rights movement in the Asian region. S/he founded OII-Chinese in 2008 which is an intersex human rights advocacy organization and is a platform for Chinese-speaking intersex people to receive information, awareness, connection and peer support. Currently, Hiker serves as a Advisory Board member of the Intersex Human Rights Fund at Astraea.

Kohl Journal: Kohl is a progressive, feminist journal on gender and sexuality focused on the Middle East, South West Asia, and North Africa regions.. This radical journal exists to ensure that MENA regions and communities play a central role in redefining their own intersections and challenges when it comes to feminist and sexuality research.

Lilit Martirosyan: Lilit is an Armenian transgender activist who has been committed to equal rights the LGBTQI+ community. Despite unfavourable conditions, she managed to set up the Right Side Human Rights Defender NGO in January 2016 which has become a safe space for the Armenian trans community and sex workers.

A. Revathi: A. Revathi is a prominent trans woman activist, writer, theatre actor, performance artist and transcestor who championed the rights of sexual and gender minorities in India for many decades.

Tatiana Cordero Velásquez: Tatiana Cordero Velásquez was an Ecuadorian scholar of gender studies and activist who has been part of the feminist collectives that worked to ensure the inclusion and proliferation of women’s and LGBTQ rights in Latin American movements. She has also been a national and international consultant and counselor of women’s funds for more than a decade (Mama Cash, GFW, Astraea, UAF-LA) and of Human Rights Watch for the LGBTI initiative.

Liberty Matthyse: Born and brought up in the rural area of Darling, South Africa, Liberty is a South African non-binary trans woman who has constantly fought against the social, economic and political marginalisation of her communities. Liberty has been the Executive Director of Gender DynamiX since 2018. Based in Cape Town, Gender DynamiX advances access to human rights and social justice for trans and gender-diverse persons through avenues such as health, education and legal advocacy.