On Voting and Visioning the Future

Right now, we’re at a crucial tipping point. LBTQI, Black, Brown, Indigenous, and immigrant communities are fighting to survive at the hands of white supremacy. And, these are the very communities securing a liberatory vision for the future. 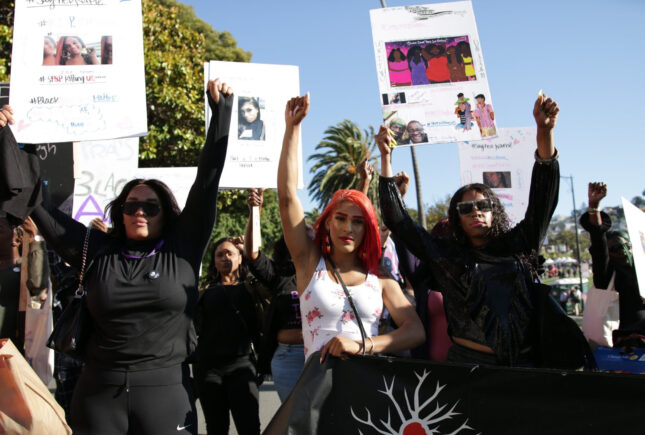 What is it you are fighting for?

Right now, we’re at a crucial tipping point. LBTQI, Black, Brown, Indigenous, and immigrant communities are fighting to survive at the hands of white supremacy. And, these are the very communities securing a liberatory vision for the future.

From its very beginnings, the United States has been a country built on slavery, settler colonialism, and extraction, yet the last four years have intensified the levels of overt violence against our communities. Time and time again, the current U.S. administration has attacked women, LBTQI, Black, Brown, immigrant, and Indigenous communities, and our most basic right to live safe, dignified, whole lives. We have seen:

While the far right works to destroy democratic institutions, engage in authoritarian behaviour, and deny our human rights, in the United States and around the world, grassroots movements continue to dream, resist, and build the future we know is possible.

If you’re overwhelmed and exhausted, we are right here with you. But as November 3 approaches, and with the stakes higher than ever in the U.S. and globally, here’s what we know to be true:

Your vote matters: VOTE, if you can.

At Astraea we are making Election Day a paid holiday. If you are an employer in the U.S., we encourage you to do the same for your staff. Voting is by no means the only way to participate in democracy, but it is one critical way to ensure that we can elect leaders who represent us, reduce harm, make strides towards more just policies, and work to dismantle white supremacy.

For so many, voting rights still aren’t a given and voter suppression under increasingly totalitarian governments is a major global threat. In the United States, the attacks on voting rights are rooted in the ongoing disenfranchisement of Black people and other communities of Color. Globally, these kinds of attacks are part of a larger far-right movement that is well-coordinated, and well-funded, designed to control and restrict the rights and bodily autonomy of women, LGBTQI communities, and other marginalized communities at all levels.

Our movements hold the transformative vision of our future: We must continue to invest in them!

The work towards collective liberation doesn’t begin or end on Election Day—far from it. Regardless of the outcome of this U.S. election, transformative change and true justice for our communities are a long way off. Yet, when we resource those at the very center of our liberation struggles, when we invest in them over the long haul, we will build power for a brighter future.

Grassroots movements have long been working towards this alternative future: one that is rooted in joy, safety, justice, and care for us all. The Movement for Black Lives (including grantee partners Law for Black Lives, BYP100, MediaJustice, Blackbird, Black Alliance for Just Immigration, and SNAPCollaborative) is constructing a future rooted in abolition. The Montana Two Spirit Society is building the leadership of queer Indigenous people. TGI Justice Project is fighting for a future free of the mass incarceration of trans People of Color. Mijente and the Immigrant Youth Coalition are part of a powerful movement that centers and celebrates all immigrants. SPARK Reproductive Justice Now! are pushing for a future in which all of us have access to our reproductive rights and freedoms. Intersex Justice Project is working towards a future in which intersex People of Color are visible and protected. And this is just a tiny glimpse into what our movements are bringing to life, through their resilience, through their advocacy, through their collective care for communities.

Our responsibility and commitment—long-term and at this pivotal moment—is to stand within the struggle, to vote when we can, and to ensure our movements have the resources they need to make this future a reality, both in the United States and around the world. At Astraea, this has been our purpose from the very beginning, to fund at the grassroots, and fuel change rooted in movement visions.

So I ask you again: On November 3 and beyond, what is it you’re fighting for?

Join Us: Fight for joy, for care, for safety for us all. Fight for transformative change. Fight for the future we know is possible.