On IDAHOBIT, a reminder to double-down in our support for LGBTQI communities globally

This year on IDAHOBIT, we recognize and honor the LGBTQI grassroots organizers, advocates, and artists who are fighting not just for equal rights and an end to discrimination and violence, but for dignity, joy, healing, and care. 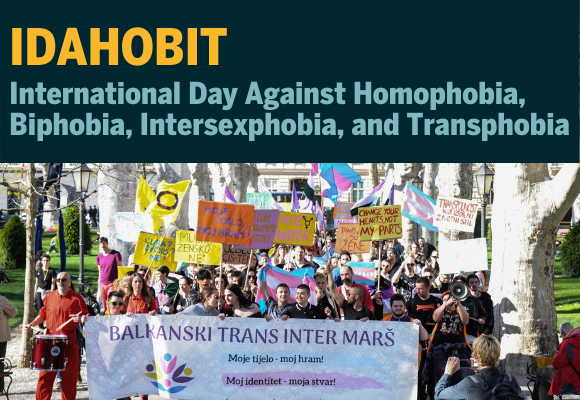 May 17 marks the International Day Against Homophobia, Biphobia, Intersexphobia, and Transphobia (IDAHOBIT). The annual event was created in 2004 to draw attention to the violence and discrimination experienced by lesbian, gay, bisexual, transgender, intersex people and all other people with diverse sexual orientations, gender identities or expressions, and sex characteristics.

This year on IDAHOBIT, we recognize and honor the LGBTQI grassroots organizers, advocates, and artists who are fighting not just for equal rights and an end to discrimination and violence, but for dignity, joy, healing, and care. We are living through a time marked by overwhelming grief: from a global pandemic that has disproportionately impacted the most marginalized around the world and legitimized states’ use of surveillance technology to crackdown on these communities; to the alarming rollbacks of queer and trans rights; to increased police violence against queer, trans, Two-Spirit, Black, Indigenous and People of Color communities; and a growing climate crisis. Yet through it all our movements are continuing to care for their people, fighting hate and discrimination through transformative policy and culture change, and building solidarity and resilience within and across communities.

Make no mistake. The threats to our communities are greater than ever, as we witness the rise of authoritarian regimes around the world, the ongoing closing of civil society spaces, and the growing influence of far right anti-gender movements. Trans rights in particular are experiencing a “global recession” according to LGBT activists at Transgender Europe (TGEU) who say that governments are using the COVID-19 crisis as an opportunity to rollback trans rights while simultaneously religious, anti-gender, and trans-exclusionary radical feminist (TERF) groups continue their attacks on trans rights around the world. Here are just a few of the hostile contexts our LGBTQI communities are living under in the current moment:

The global anti-gender and far-right movements have built and funded a network across different religions and bridging secular and religious divides. If we want to end homophobia, biphobia, intersexphobia, and transphobia and systemic discrimination against our communities, we must bring the kind of committed funding and support to our movements that far-right, fascist groups have brought to anti-gender movements.

This is precisely our mandate as Astraea, a feminist funder of the LGBTQI grassroots for over 44 years. Our unique vantage point puts us at the nexus of the very communities most under attack – LGBTQI communities, People of Color, ethnic and religious minorities, Indigenous people, and women. We exist to shift power to these very communities, particularly those whose voices are most often silenced, but who as the most impacted, are best suited to make lasting change. We do this by providing funding that is necessarily flexible, that is nimble, and that is long-term – funding that is responsive to the needs and priorities of our movements, so that they can care for their communities.

Until we are all free, none of us are free. Our collective liberation is dependent on protecting, nurturing, listening, supporting and sustaining the radical LGBTQI grassroots visions of the future – ones that are rooted in self-determination, radical love, accountability, collective care, right relationship with the earth, and with each other. That is the resilient, joyful future we have a responsibility to support. Join Us.