Today, as many of us go about our Tuesdays, the United States Supreme Court is hearing oral arguments in three LGBT cases for the first time since President Trump nominated two justices to the court, including Justice Kavanaugh. 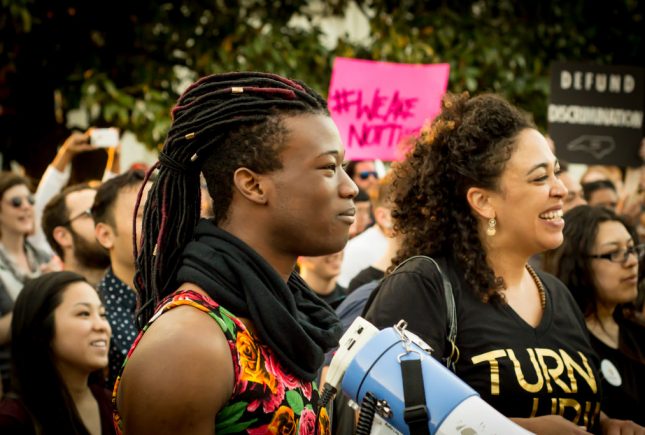 Today, the United States Supreme Court is hearing oral arguments in three LGBT cases for the first time since the President nominated two justices to the court, including Justice Kavanaugh. The specific question at stake in all three cases is whether it should be legal to fire employees on the basis of sexual orientation or gender identity. However, this is also symptomatic of a much larger, well-funded global attack on LGBTQI and women’s rights more widely.

These cases—Altitude Express Inc. v. Zarda, Bostock v. Clayton County, and R.G. & G.R. Harris Funeral Homes v. EEOC—all concern protection from discrimination based on sex under Title VII of the Civil Rights Act of 1964. In the Zarda and Bostock cases, Donald Zarda and Gerald Bostock—two gay men—were fired from their jobs because of their sexual orientation. In Harris Funeral Homes, Aimee Stephens—a trans woman—was fired two weeks after telling her boss she is a woman. Her boss has claimed that he would be violating “God’s Commands” by allowing Stephens “to deny [her] sex while acting as a representative of [the] organization.”

The Supreme Court’s decisions on these cases will not be released until well into 2020, but they are critical regardless of their outcomes. For one, the very existence of the Harris Funeral Homes case validates right wing groups’ desire to reject and erase the existence of trans people altogether. In briefs filed ahead of oral arguments, the Alliance Defending Freedom (ADF)—the group representing Thomas Rost of Harris Funeral Homes—did not recognize Aimee Stephens as a woman, and in fact specifically avoided using her correct pronouns. The ADF is at the forefront of the conservative legal battle to use religious exemptions to roll-back women’s and LGBTQI rights.

If the Supreme Court rules in favor of Harris Funeral Homes, it will also indicate that the law allows employers to fire an individual in the United States simply for being trans. As Chase Strangio—Deputy Director for Transgender Justice at the ACLU and part of the counsel in the Harris Funeral Homes case—said on Twitter, “the consequences of a ruling against the LGBTQ employees will be far reaching,” and will begin the unraveling of decades of sex discrimination advances.

Right wing groups including the ADF are also using well-honed strategies of division, and they frequently use misleading rhetoric to intentionally pitt women’s rights activists against LGBTQI activists. In this case, the ADF has argued that should Stephens prevail, “equal opportunities and bodily privacy protections for women and girls will be lost.” This attempt to set women’s rights against trans, LGBQ, and intersex rights is both dangerous and false. Advancements in sex-based discrimination protections protect all, regardless of gender and sexual orientation. A decision against Stephens would suggest that anyone who does not conform to rigid, retrograde gender norms—regardless of gender identity or sexual orientation—is putting their employment on the line.

The very fact that three cases in 2019 ask whether it is lawful to fire someone simply for being LGBTQI, suggests that many believe LGBTQI people should not be entitled to the same protections against discrimination as their cisgender and/or heterosexual counterparts. This sentiment is not new. In the U.S. and in regions across the world, growing far-right anti-gender movements, which we wrote about recently, are strategically weaponizing conservative rhetoric that would have people believe that we are the enemy.

These ‘gender ideology’ movements are part of a growing, well-coordinated, funded global movement which has been designed to control our communities by restricting the rights and bodily autonomy of LGBTQI communities, women, and people of color. Their intent is to “depict efforts to expand rights for women and LGBTQI people as radical, dangerous impositions designed to eliminate all sex differences.”

The current Administration’s own ‘gender ideology’ agenda is evidenced through its growing list of efforts to rollback rights and protections for women and LGBTQI communities by proposing a ‘legal’ definition of sex based on gender assigned at birth, thereby disregarding individuals’ gender identities and expressions; banning transgender people from serving in the military; and restricting federal funding for health clinics that provide abortion referrals, just to name a few. These relentless attacks denying protection to women and LGBTQI communities are intentional and highly strategic. They are also creating the conditions for increased violence and hate against LGBTQI, Black, Brown, and migrant communities. This year alone, 19 trans women of color have been murdered around the country as trans rights continue to be stripped away in multiple policy areas.

While these cases have only begun to attract mainstream media attention over the last couple of weeks, they are being cited as the single most important set of explicitly LGBT cases to reach the Supreme Court because they encompass both sexual orientation and gender identity, and so potentially impact the livelihoods of all LGBTQI people and women in the United States. That they have even made it to the Supreme Court is evidence of the growing tide of discrimination against women and LGBTQI people. These rulings directly address discrimination based on sex and will also have implications for sex-based discrimination protections for all women more generally, who regularly face workplace discriminations.

Over forty years ago, Astraea’s founding mothers understood that the struggle for women’s rights was and is intimately linked to the struggle for LGBTQI rights. Then and now, these struggles and the threats against them have been global in nature, and activists around the world continue to resist far-right gender ideology movements as a matter of survival. These are not just battles taking place “over there,” but here in our own backyards, in the United States legal system and in our ongoing culture wars.

What we have learned from movements in other countries is to push back against these anti-gender, right-wing forces, women’s rights and LGBTQI rights movements must come together. Our struggles are inherently connected, and connection and solidarity will fortify us to combat the attacks on all our bodies, lives, and freedoms. Astraea has always prioritized shifting power and resources to grassroots feminist, LGBTQI movements working in solidarity all over the world, understanding that it is through resourcing and working at the very junctions that abnegate power, freedom, and rights, that we can support movements to bring about the most meaningful, and lasting change. After all, there is no freedom for some at the expense of others.

Donate to Astraea and support the grassroots feminist and LGBTQI activists working in solidarity to fight hate and discrimination against our communities.