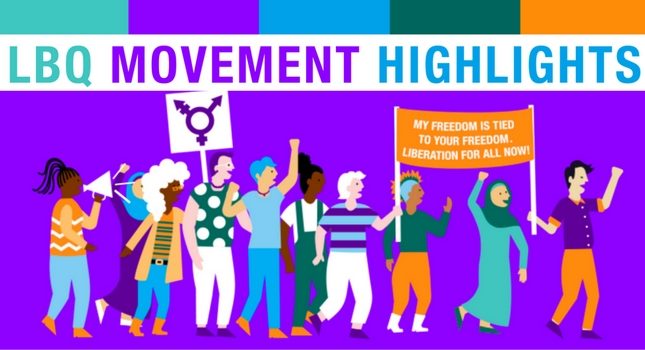 Today, in partnership with Mama Cash, we’re excited to share an infographic report highlighting Lesbian, Bisexual and Queer (LBQ)-identified women and non-binary people’s brilliant visions of liberation and their persistent need for resourcing. As oppressive forces become ever-emboldened around the world, it is critical now more than ever that we support the organizing of LBQ-identified women and non-binary people. These communities are among the first to feel the effects of repression, and also have the vision and strategies we need to fight back.

Astraea has always been committed to bolstering the sustainability, resilience and resistance of LBQ communities. This graphic report lifts up the principles of feminist LBQ organizing, which we believe must be prioritized in order to produce long-term structural change.

“LBQ women and non-binary folks have long been at the frontlines of movements such as women’s rights, LGBTQI rights, environmental justice and racial justice, among others,” said Mariam Gagoshashvili, Senior Program Officer at Astraea. “Their work is deeply intersectional, and often brings to the table overlooked but transformational strategies like alliance-building and cultural change. The time has come for this community to allocate attention and resources to addressing its own needs and lived experiences, while continuing to fight for all these causes.”

“Why this focus now? We are witnessing a global pull-back on protection and liberation for all people, and an increase in violence, exploitation and oppression,” said Happy Mwende Kinyili, Director of Programmes at Mama Cash. “Women and those people who reject or transgress accepted gender and sexuality roles are the most vulnerable. From our experience, we know that LBQ women and non-binary people are also one of the most under resourced communities. We must increase support in this moment when they are most at risk.”

“There are so many possibilities if you have LGBT projects, if you have women’s rights projects that have a wider scope,” said Maya Tabidze, a Georgian activist with Astraea grantee partner Women’s Initiatives Supporting Group (WISG). “But when it comes to LBQ women, it’s always limited.”

Over the next year, Astraea and Mama Cash will be producing critical research on the state of philanthropic support for LBQ-identified women and non-binary people’s organizing, so we can advocate for more and better resources for their liberatory work. Stay tuned and join us!

*We understand language is limited and gender exists on a continuum; after year-long consultations with activists, we use the term “LBQ” to refer to the focus on sexual identity; it includes women (cis and trans) and all non-binary people on the gender spectrum who relate to a lesbian, bisexual, and/or queer identity.

LBQ communities face unique, structural health and economic disparities, misogyny and violence, yet there is a persistent lack of attention and resource paid to their needs and priorities, both within LGBTQI, human rights and women’s rights spaces. This report aims to celebrate unique LBQ movement highlights, call attention to the movement’s specific challenges, and break down the funding silos.

This initiative is informed by our deep commitment to supporting the most underfunded and marginalized movements, including trans and intersex movements whose unique resourcing challenges are addressed in the following two reports: The State of Trans Funding and The State of Intersex Funding.