Today, the Williams Institute, as part of the LGBTI Global Development Partnership has released three new research reports detailing the average levels of acceptance for LGBT people around the world. 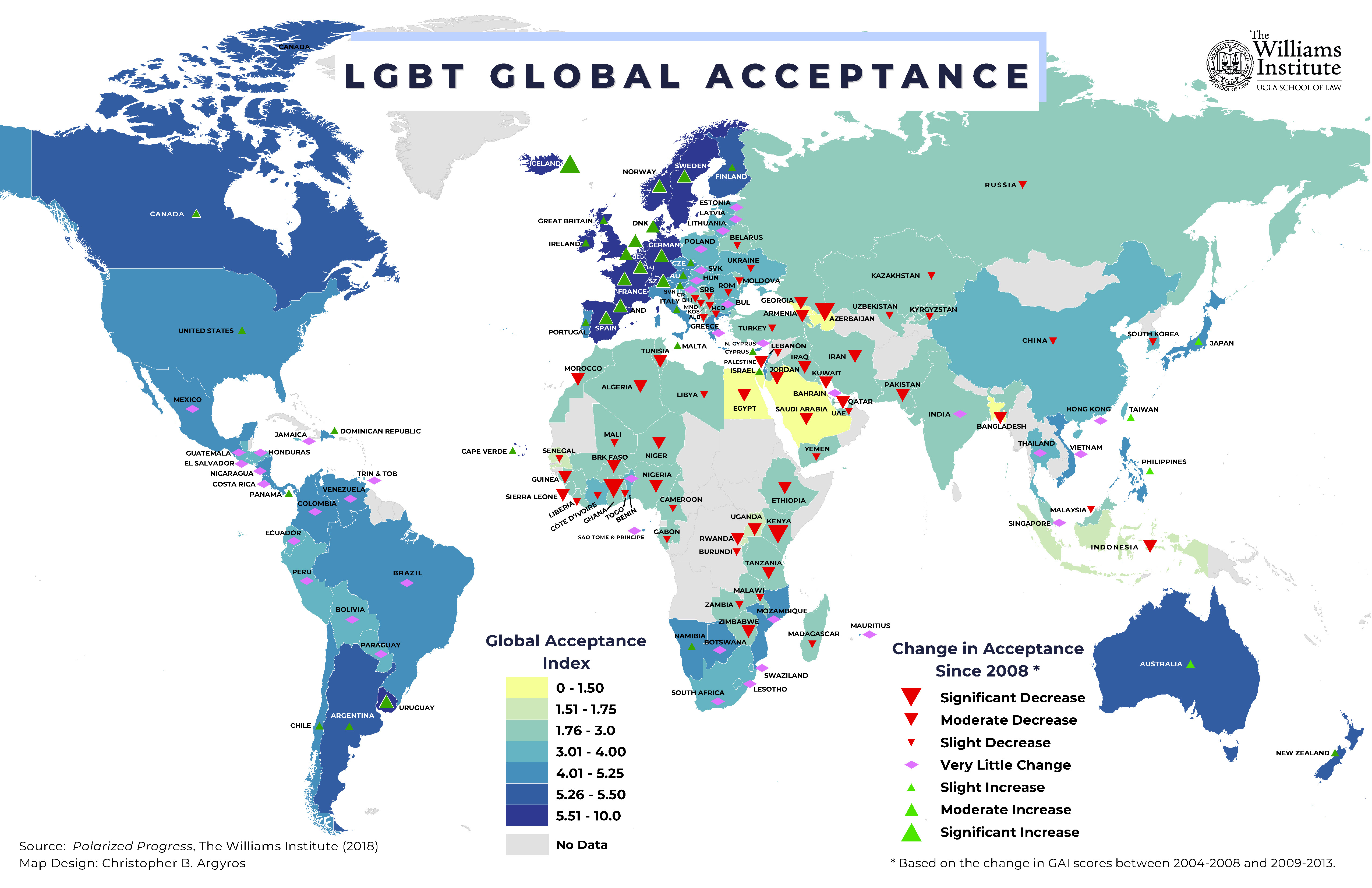 Today, the Williams Institute, as part of the LGBTI Global Development Partnership has released three new research reports detailing the average levels of acceptance for LGBT people around the world. The findings reveal that LGBT rights have increased globally since 1980, though acceptance has become more polarized; increasing in the most accepting countries and decreasing in the least.

“The Global Acceptance Index provides a consistent and comparable way to measure attitudes and attitude change, which could better understand inclusion of LGBT people in many areas of social, economic, and political life,” said lead author Andrew R. Flores, Visiting Scholar at the Williams Institute.

Two additional studies used the Global Acceptance Index to analyze the effects of LGBT acceptance and inclusion. Examining the Relationship between Social Acceptance of LGBT People and Legal Inclusion of Sexual Minorities found that democracies with a commitment to a free press and the rule of law had the strongest relationship. However, the relationship between acceptance and legal inclusion becomes weaker in shrinking civic spaces, such as autocracies and anocracies.

A third study, Links between Economic Development and New Measures of LGBT Inclusion, affirmed previous findings that the inclusion of LGBT people is linked to a country’s economic performance.

Some key findings include

These new measures allow for global, cross-national comparisons of public sentiment about LGBT people and their rights. “The Global Acceptance Index,” notes Kerry-Jo Ford Lyn, Director of the LGBTI Global Development Partnership, “provides a critical global benchmark for measuring and comparing progress we make in ensuring that LGBT populations are protected from violence, stigma, and discrimination wherever they are.”

Astraea is committed to supporting the LGBTQI grassroots organizations around the world who are working to reduce violence and discrimination, and bring lasting social justice to our communities.

Note: These reports were produced as part of the Lesbian, Gay, Bisexual, Transgender, and Intersex (LGBTI) Global Development Partnership. The Partnership was founded in 2012 and brings together the United States Agency for International Development (USAID), the Swedish International Development Cooperation Agency (Sida), the Arcus Foundation, the Astraea Lesbian Foundation for Justice, the National LGBT Chamber of Commerce, the Gay & Lesbian Victory Institute, the Williams Institute, the Swedish Federation for LGBTQ Rights (RFSL), and other corporate, non-profit, and non-governmental organization resource partners.