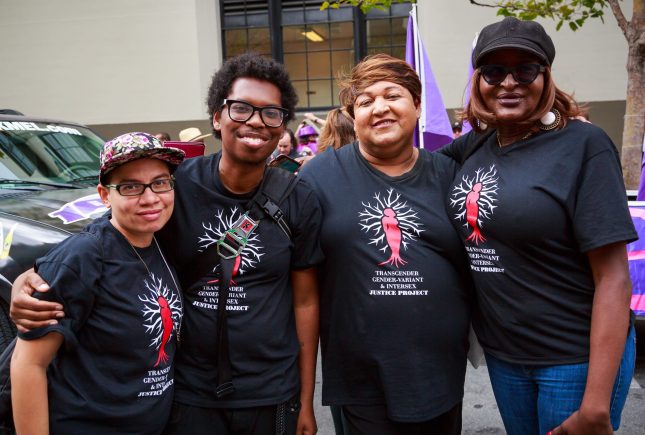 In the video above, TGIJP current and former staff share more about their work supporting incarcerated and formerly incarcerated trans and gender nonconforming people.

[Miss Major]: My generation has leaped over cars, ran from police, been beaten, stoned, puked, had, thrown underneath the bus, and then told, “What’s your problem? Why can’t you just get over it?”

Well the things that were happening for the transgender women of color at the time that we began was primarily the same thing that’s going on now. That they’re being picked up and harassed for just doing things that involve their daily lives, that they haven’t done anything that warrants them being taken up off the street, abused and beaten and thrown into jail.

And so the purpose of us was to give them a sense of hope, a meaning, to let them know that somebody gave a damn about who they were.

[Janetta Johnson:] The majority of the women that come in for services are formerly incarcerated homeless transgender women. There’s a lot of psychological and emotional abuse. When trans women are basically verbally attacked by the jail staff, it puts trauma on top of the trauma that we already face being trans people.

There’s not a system set up in there to provide adequate, culturally competent medical and mental health.

[Janetta Johnson into megaphone]: “Our incarcerated members know that we’re here and we support them.”

[Miss Major:] The funding from Astraea was a blessing because, you know, nobody wants to deal with anyone in prison, period.

[Janetta Johnson:] Astraea gave us an opportunity to continue to support our programs. We bring in a bunch of volunteers and we correspond to trans, gender nonconforming folks that are in prison and getting out of prison.

We have a family concept, and you know, Miss Major’s the mother of all of us.

I’m very happy and grateful that I get to lead this organization into the future.

[Miss Major:] I went to prison, I lived in the street, I had to struggle. You know.

And once you’ve done that you go, “Oh god, if I can stop some young girl from having to go through this, I gotta do it.” You know.

And you have to reach down and help the next person up.