LGBTQ Groups Bring Queer and Trans Voices to May Day

Today, LGBTQ communities around the world are marching for May Day, a day historically dedicated to workers rights and labor movements which is celebrated as a national holiday in over eighty countries. In New York City, Astraea will march in solidarity with five of our grantee partners who have formed a Lesbian, Gay, Bisexual, Queer, Trans, Two-Spirit and Gender Non-Conforming (LGBTQTSGNC) contingent to increase visibility of LGBTQTSGNC communities in immigration and worker rights debates and movements. Starting at 4pm today, the Audre Lorde Project (ALP), FIERCE, Queers for Economic Justice (QEJ), Sylvia Rivera Law Project (SRLP) and Streetwise and Safe (SAS) will join a public rally in Union Square and will later march through lower Manhattan down Broadway.

Increasingly, LGBTQ organizations have been bringing light to migrant issues within LGBTQ community organizing. Groups are pointing to economic justice and immigrant rights as an LGBTQ issue, and are defending LGBTQ workers affected by attacks on unions and worker organizing. LGBTQ groups are rallying opposition to increased police and law enforcement measures that put already vulnerable LGBTQ communities and LGBTQ immigrants at further risk of violence and deportation. Understanding that U.S. economic policies have created conditions that have forced people to migrate here, groups are calling for the human and economic rights of LGBTQ communities, regardless of immigration status, to be protected. This includes physical safety from violence, legal representation, access to housing and other basic needs. The concern for protection is well-needed. According to a report by the National Network for Immigrant and Refugee Rights initiative HURRICANE, immigrants are the fastest growing prison population in the U.S. and over 50% of all people in deportation proceedings do not have legal representation or legal counsel.

For ALP, FIERCE, QEJ, SRLP and SAS, the LGBTQTSGNC May Day contingent in New York City is their first collaboratively organized event. They are calling for community participation in the contingent to show solidarity with LGBTQ immigrants, undocumented people of color, and low-income communities. In preparation for todays march, the groups hosted educational events earlier this month that explored the relevance of labor rights and immigrant rights to LGBTQ communities and issues.

The LGBTQTSGNC May Day contingent here in New York City follows recent developments in national LGBTQ activism opposing a controversial U.S. Immigration and Customs Enforcements Secure Communities (S-Comm) program. S-Comm is a federal program that automatically crosschecks fingerprints of anyone arrested by local law enforcement with federal immigration databases. As a result, local enforcement records will be shared with federal immigration authorities on anyone arrested, regardless of whether probable cause to arrest them existed, whether they are ever convicted of a crime, and regardless of the type of charge or its validity. SAS, alongside another Astraea grantee partner, Community United Against Violence (CUAV), and labor organizers, National Day Labor Organizing Network (NDLON), have been leading opposition to S-Comm, calling for President Obama to end the program and gathering endorsements and support across the country.

SAS, CUAV, and NDLON have noted that by bringing immigration officers and local police forces together, S-Comm puts people who interact with the police or the criminal justice system at greater risk of deportation. Programs like S-Comm add acute threat to the safety of LGBTQ immigrants and LGBTQ communities who already experience police profiling and hate violence because of their race, class, sexuality and gender. For many LGBTQ immigrants, migrating to the U.S. has been not only a matter of fleeing unstable economic situations but also persecution based on sexuality and gender. Additionally, the National Coalition of Anti-Violence Programs has voiced concern for LGBTQ survivors of violence, for whom it is not uncommon to be arrested when they call police for help. According to CUAV, S-Comm has contributed to skyrocketing numbers of detentions and deportations. If a question about someone’s immigration status comes up in the cross-check process, Immigration and Customs Enforcement (ICE) pressures local jails to detain community members for deportation even if a judge has ordered their release or has dismissed the charges against them.

Community efforts to expose S-Comm have grown in strength and momentum. Some states responded, addressing ways to modify or opt out of the national program. The federal response has been sharp. Director of ICE, John Morton, announced that ICE would make its program mandatory, terminating all agreements with states and counties to modify the program. This has only raised impetus for LGBTQ groups to protest S-Comm. On National Coming Out Day in October 2011, several national organizations added their endorsements to SAS, CUAV and NDLON’s call for S-Comm’s end. The National Gay and Lesbian Task Force (NGLTF), the National Center for Lesbian Rights (NCLR), and the National Coalition of Anti-Violence Programs (NCAVP) were among others who joined over 75 national, state, and local LGBT groups, including the Astraea Foundation, in protest of S-Comm. 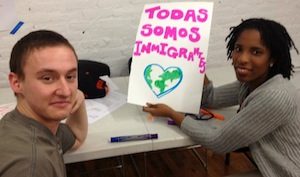 With the momentum of national LGBTQ immigrant rights organizing, the presence of LGBTQ groups at May Day gatherings around the world today marks an important moment in the confluence of the LGBTQ, immigrant and economic justice movements. Today is an important moment for cross-movement solidarity. In Union Square, the city has prepared for a large May Day turnout. Police officers are gathering in force, barricades already lined up through the streets. This afternoon, the LGBTQTSGNC May Day contingent will join activists and communities of a wide variety—immigrants, union members, workers of many backgrounds, and Occupy Wall Street activists.

Today, Astraea stands in solidarity with the LGBTQTSGNC May Day contingent and with our grantee partners across the country and around the world who are adding their voices to immigration and worker rights movements. In the face of attacks on immigrants and laborers, nationally and around the globe, Astraea stands up for the rights of LGBTQ immigrants and LGBTQ workers to have physical safety, economic security and legal protection.