A conversation between Aizhan Nomad of Labrys Kyrgyzstan, Shalini Eddens of UAF, and Mariam Gagoshashvili of Astraea about LGBTQI+ activism in Central Asia and Eastern Europe and the importance of connecting activists working across the region. 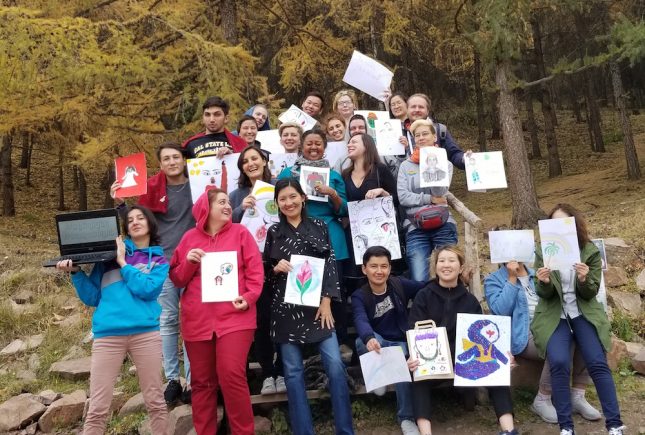 Central Asia and Eastern Europe are often forgotten regions when it comes to our awareness of geopolitics, social, or cultural issues. Because of this, there have traditionally been fewer resources and less support provided to activists fighting for LGBTQI+ rights and justice in the region. Even today, only 4% of all foundation human rights funding supports efforts in the CAEE region, and funding actually declined between 2013 and 2015¹. The region is also the second most underfunded in the world in terms of LGBTQI+ rights, after the Middle East and North Africa. And yet, ongoing efforts by state forces in Central Asia and Eastern Europe to restrict internet freedom and freedom of expression, shrink or close civil society spaces, and crack down on human rights mean that it is extremely critical to bolster and resource LGBTQI+ activists there.

Astraea teamed up with the Urgent Action Fund for Women’s Human Rights (UAF) in September 2018, to co-create a convening for LGBTQI+ activists from all over the region to meet, collaborate, create, and build power together. The convening was an opportunity for activists to dive into the ways digital activism can strengthen queer and trans activism across the region, while also taking time to reflect and consider its implications to physical and organizational security, and mental burnout. Labrys, a long-time Kyrgyz grantee partner, hosted the four-day convening. It was held at a resort in northern Kyrgyzstan, ending with a joyous celebration of queerness at a party in Bishkek. Participants came from all over the Post-Soviet region, made up primarily of cis-queer women, trans people, and non-binary activists. Intentionally set in a serene mountain-top resort, activists also had the opportunity to unwind, spend time in nature, and take part in healing and self-care practices.

We sat down with Aizhan Nomad of Labrys, Shalini Eddens of UAF, and Mariam Gagoshashvili of Astraea to hear more:

Mariam, what would you highlight about digital activism and other work being done by LGBTQI+ activists in the region for people who may not know much about it?

Mariam: You know, this is a region that is really struggling with colonial oppression and is often very very unsafe for queer and trans women, and for the greater LGBTQI community as well. But it’s also a region where you have really amazing, inspiring examples of activism, collaboration, and that is only growing and strengthening against all odds, especially the major lack of funding and resourcing.

Arts and cultural activism have been central tool for many activists, and some of that has now evolved into digital activism as well. Because the LGBTQI+ communities in the region are often invisibilized and in some places, even criminalized, activists often take on really creative strategies of resistance.

For example, in Kazakhstan protests are often framed as theatrical performances. In Armenia, there is a group that runs a feminist library, to broaden public education around queer issues. In Ukraine, we have a grantee partner who organizes equality festivals around the country, co-organized with other local activists; they tend to utilize a range of multimedia and are interdisciplinary and intersectional, dealing with subjects from migrant rights to abortion. Our grantee in Russia is using its knowledge of digital technologies and legal issues to support trans activists navigate restrictions around civil society, internet freedom and LGBTQI rights.

Aizhan, as activists, what was the impact of having activists from all over the region come together to talk about LGBTQI+ issues and the political and social issues related to that across the region?

Aizhan: This was honestly the first time where we had LGBTQI+ activists coming from all across the region. It was incredible to be able to really hear from one another about the various challenges we are facing in our countries, the achievements on the ground, and generally share our experiences as activists.

We discovered a number of similarities in terms of the political challenges and discriminatory practices we are facing, many of which are led by or started in Russia, and then taken on by many of our governments.

We also strategized about how best to decolonize our language and make it more representative of our communities. Many of us have already been working on this concept within our own organizations but it was great to be able to think collaboratively on how we can create terminology that best reflects our identities and cultures, and hasn’t necessarily been imported from Western or Russian languages.

Shalini and Mariam, as funders who have supported activists in the region, why was it so important for you to co-host this kind of convening?

Shalini: Given that we have a really strong grantmaking program in the region, this convening was such a fantastic opportunity for us to meet with so many activists we support and really see and understand their movements in a more tangible way. It also really allowed us to solidify our collaborative approach and values around funding, by being able to partner with organizations we have had the honor of supporting.

As co-hosts, Astraea and UAF gave some support in terms of logistics and offering insights and training on certain aspects of the program, but it was really good to have Labrys leading the process, given their immense knowledge of the region and movements there. Ultimately, the convening really deepened existing relationships, helped us build new ones, and expanded our understanding of LGBTQI activism in the region as it relates to digital security.

As our facilitator Angelika Arutyunova a queer feminist trainer with deep roots in the region, said in her reflection on the convening, “Convenings are a place for convergence of new ideas and connections of activists and funders face to face that cannot be replaced. It would be very challenging to have a virtual convening or a social media exchange that would create a trustful space for participants to engage in a deep conversation. For convenings like the one we had in Kyrgyzstan, that aimed to build solidarity and trust, it took careful weaving of methodologies to build trust that led to some profound conversations.”

Mariam: I think one of the most incredible parts was having many activists within the movement come together for the first time and have the opportunity just to get to know each other, listen, and relate to one another’s experiences. It was also – as Aizhan said – a space to identify the challenges as well as the advancements in their countries, and map some of those out, particularly as it relates to the influence of Russia and of colonialism.

For me, the convening really made it clear the immense value in cross-border collaboration and strategizing. There was a real appetite among folks to work together, to create communication platforms, and build spaces to stay digitally connected. The activists discussed creating stronger networks and potentially even a more formal regional organization to do regional advocacy, strategy, and peer exchanges, and also to have cultural, sports, and arts events and raise visibility of the LGBTQI+ communities. This felt particularly important because activists from CAEE have not always felt ownership over wider European spaces that are often perceived as more Western-led.

It was important for the convening to be conducted in Russian – a language spoken widely in the region in spite of its colonial nature and to have the space to reflect on the implications of using both English and Russian languages, and terminology, and to make a conscious effort to come up with alternatives that feel more true to local realities and languages.

Shalini, what were some of the major learnings for UAF around this convening?

Shalini: I think that a lot was actually reaffirmed; we definitely learned a lot, but many of those learnings were a reaffirmation of our instincts, and seeing them come to life in this way was wonderful. We feel strongly that it is essential to let local partners like Labrys take the lead, and they did that beautifully by creating an open, safe, inviting space for the activists.

Our role as funders is to facilitate spaces like this convening, but not to control the design of them. In that vein, we re-learned the importance of making sure we find our balance of being an activist funder, and not taking up too much space.

I think the other big learning was just around how incredibly transformative it is to collaborate with like minded organizations. We have worked alongside Astraea for a long time, but this was the first time we partnered with them on a convening like this, and to do that with an organization whose political and funding values are so aligned with ours made it really effective.

Aizhan, finally, what were the highlights of the convening for you personally?

Aizhan: For me, it was the care that we created amongst one another as activists, and the power that we have shared through exchanging our stories. Often, we have to really push ourselves to continue the work that we do because it can feel like we’re working on our own, but the convening helped me to see the amazing creativity in our communities, and how we can build on that together to make things easier and better for our communities both in our countries and across the region.

In her reflection, Angelika beautifully summed up the personal impact of a convening like this, writing, “It was deeply personal for me to be at this convening and to facilitate it. Having left my home country of Uzbekistan 17 years ago, my heart has never left the region. Being back to Bishkek where I used to come as a young activist from Uzbekistan for convenings, conferences, and exchanges, was profound…while still facing oppressions, the activism is resilient, deeply political, and playfully creative. This convening was part of planting a seed for more region-wide solidarity and engagement among activists.”

Astraea has been committed to supporting grassroots activists in the CAEE region for over two decades, recognizing the strength, resilience, and simply the existence of activism against all odds. In May 2018, acknowledging that trans activists have begun relying on the internet in particular as a means of organizing, Astraea, along with Transgender Europe (TGEU) produced the report, Mapping Digital Landscapes of Trans Activism in Central Asia and Eastern Europe. The report found that trans communities in the CAEE region are resisting the challenges of surveillance and threats to freedom of expression using digital tools in extremely innovative ways, from relocating servers to safer places, to using social media as a way to increase visibility to their issues and bring communities together. While these brilliant, bold activists are already using creative means to strengthen their movements, there is an urgent need to invest in them and their strategies so that they can continue the fight against oppressive forces.

If you want to learn more about the convening held in Kyrgyzstan, this reflection piece by facilitator Angelika Arutyunova offers more insights and learnings.