June 2022 Reflection: “This is the fight for ALL of our lives”

At Astraea, we affirm that any person who wants to have an abortion should be able to, and not have to explain themselves. We refuse to lean into the darkness of despair. We proclaim our power to choose – to choose to live in our truths, to choose what we do with our bodies, to choose when and whether we want to be parents, to choose pleasure and liberation. 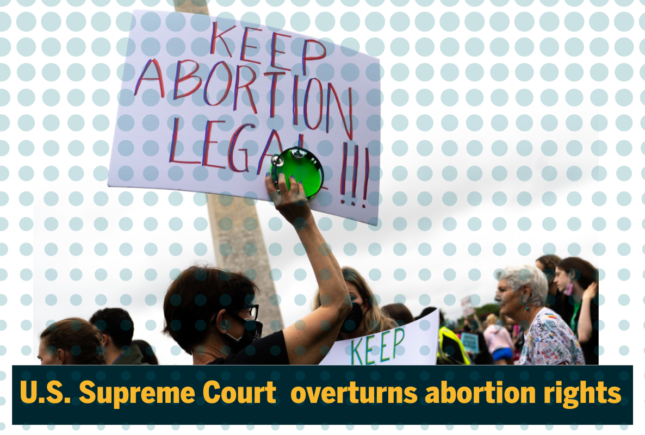 June is Pride Month for many of us and marks a time of joy, celebration, and gratitude at Astraea Foundation for the activists who came before us that fought for our collective liberation.

Yet, I am also carrying a profound sense of loss and anger about the world we find ourselves in. We continue to see the erosion of fundamental human rights in every region of the world. Today,, the United States Supreme Court stripped away national abortion rights, opening the door to the dismantling of hard earned rights gained over the course of five decades by social justice movements.

It is OK to be angry. I sure am. I am angry that the Dobbs v. Jackson Women’s Health Organization decision is yet another example of how governments seek to control our bodies and regulate what we are able to do. I know that regressive views on abortion access cannot be separated from attacks on trans kids’ bodily autonomy, the criminalization of LGBTQI-affirming care, and the relentless efforts to erase our history, memories, and our very existence.

I am angry at the hypocrisy of invoking individual “choice” around vaccines, gun control, and the exercise of religion, while ignoring the daily violence faced by those of us who are not cis, white, straight, or male, especially as our rights are stripped away. I am angry that some leaders are using an alleged concern for children’s wellbeing to manufacture moral panic. I am angry at the cynical decisions being made over whose lives are essential, whose lives matter, and what is worth protecting.

There has been a roadmap for decades that seeks to promote conservative and patriarchal agendas, especially related to abortion and LGBTQI rights around the world. American Christian Right groups have spent over $280 million dollars on five continents to fuel anti-gender campaigns against feminist and queer communities. Through this decision, they are telling us exactly what they are going to do. The goal is to control us, to hide us, to ban us, and to even obscure our humanity.

There is a way forward: we can’t let them. We have to keep imagining and creating a better world.

In our darkest moments, of which there are many, there have been multi-gendered and multi-racial groups of people fighting for something more. Building power requires a long-term investment in collaborative movements with the energy to make transformative change.

I look for inspiration in places like Poland, Chile, and Colombia, where organizers are shifting the legal and cultural landscape for the better in their countries. Two years after women-led protests successfully moved Chile away from its dictator-era Constitution, Chile has legalized same-sex marriage and could soon become the first country in the world to give constitutional status to abortion rights.

In Poland, LGBTQI people continue to organize in defiance of social and governmental hostility while building broad coalitions with feminists, farmers, union workers and others to reject rising authoritarianism. In the past four months alone, abortion has been decriminalized in Colombia, while LGBTQ representation in Colombia’s Congress has tripled.

At Astraea, we affirm that any person who wants to have an abortion should be able to, and not have to explain themselves. We refuse to lean into the darkness of despair. We proclaim our power to choose – to choose to live in our truths, to choose what we do with our bodies, to choose when and whether we want to be parents, to choose pleasure and liberation.

This is a fight for ALL of our lives.