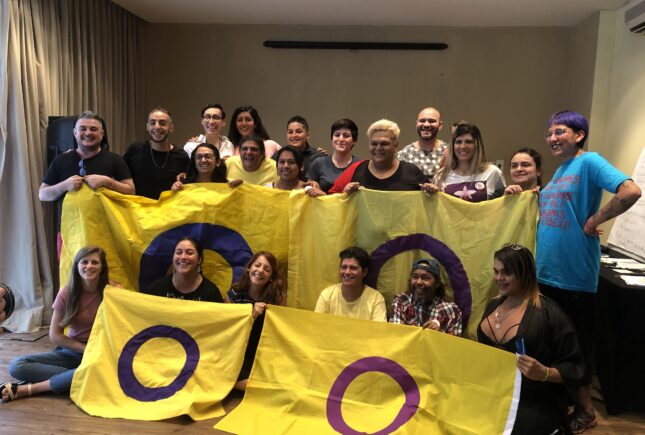 This Intersex Awareness Day, it is with great pride and excitement we share Astraea’s 6th annual cycle of Intersex Human Rights Fund (IHRF) grantee partners! On this day, we recognize the work of the incredible intersex activists and organizations whose advocacy and self-determination have built a powerful global intersex movement and visibilized the lives and experiences of intersex people everywhere.

Astraea is proud to support many of these activists through our Intersex Human Rights Fund—the first of its kind—which accounts for almost three-quarters (73%) of all grants to intersex organizations in the world. This year, the IHRF granted $480,000 in grants to 53 groups in 41 countries, with 15 of these grants going to new grantee partners. This marks a 65% increase in funding from our 2019 cycle, reaffirming our commitment to supporting the growth and sustainability of intersex movements. It has been so exciting to continue to see the emergence of new intersex-led groups, some of which were formed as a direct result of the connections built through regional movement convenings in past years!

This year, as the world grappled with the COVID-19 pandemic, the IHRF provided an additional $2000 to all our renewal intersex grantee partners. The pandemic and associated restrictions on movement have heightened the exclusion and discrimination many intersex people already face in communities around the world, and has left many without jobs, unable to access the medical and mental health services they need, and isolated from their loved ones.

Still, intersex movements have continued to be tireless in their efforts to build community solidarity, advocate for their rights to bodily integrity, raise awareness of and fight for their human rights, and collaborate across movements, issues, and regions to make their voices heard!

Here are just a few examples of the powerful ways our intersex grantees show up for their communities:

While intersex activism has been growing around the world, intersex issues and communities remain immensely under-funded, receiving less than 2% of global foundation funding for LGBTQI people and/or women and girls. Despite this, intersex activists are continuing to tirelessly advocate against the pathologization of intersex bodies and to address issues of violence, social exclusion, and lack of access to quality health care and education. The global intersex movement is calling for protections from human rights violations experienced by intersex children, adolescents and adults across the world.

Join us in recognizing the brilliant and powerful activism of our Intersex Human Rights Fund grantee partners around the world!

*Note: We do not publicize a number of our courageous grantee partners because of security threats they face in their local contexts, so organizations may be missing from this list.