May 2022 Reflection: May Her Memory Be For a Revolution this #IDAHOBIT

Today, as we honor IDAHOBIT (International Day Against Homophobia, Biphobia, Intersexphobia and Transphobia), Urvashi Vaid’s life and work is a clarion call for how to proceed. She pushed for rights and policies, but never took her vision off our collective liberation. 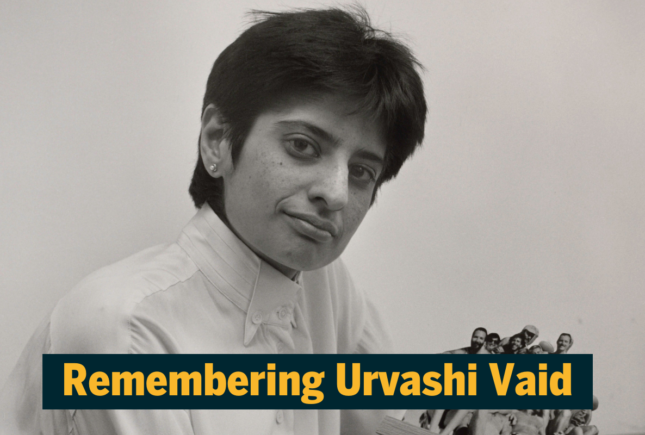 As I sat down to write this piece, I found out Urvashi Vaid had died. Urv, as she was universally known, was a force beyond nature. She was the first woman of color to lead the National LGBT Task Force, a founder of Lesbian Political Action Committee (LPAC) and the author of Virtual Equality and Irresistible Revolution: Confronting Race, Class, and the Assumptions of LGBT Politics. When the public face of the gay and lesbian (as it was then known) movement was universally white, gender conforming, and male, she was brown, visibly queer, and proudly lesbian. She was loud and uncompromising. Her relationship with Kate Clinton was the stuff of legend: two powerful women in love, each leaders in their field, and a visible exemplar of tangible support and love.

But beyond her resume and numerous accolades, she was the person who told you that you were messing up (never in that gentle of language). She told you in the toughest and kindest way possible that you needed to be doing more. As news of her death spread, texts and conversations with friends and my partner all had the same theme: “She told me to do more on this issue I was scared to work on and she was right.” She pushed each of us, not on assimilation and whitewashing, but on trans rights, homelessness, criminal justice, and economic inequality. It was an honor when she told you to step up: that the movement needed you, that you needed you, that she needed you to. Her words were always spoken with love and a belief in the world that you could be a part of creating.

Today, as we honor IDAHOBIT (International Day Against Homophobia, Biphobia, Intersexphobia and Transphobia), Urv’s life and work is a clarion call for how to proceed. She pushed for rights and policies, but never took her vision off our collective liberation. As the LGBT movement in the United States professionalized, she never changed who she was or what she believed to fit in. She talked about sex and sexuality, she talked about race and class, and she pushed us to recognize how misogyny pervaded the present day movement.

We stand at a moment where so much that Urv fought for is being threatened. May 17 was specifically chosen as IDAHOBIT to commemorate the World Health Organization’s decision in 1990 to declassify homosexuality as a mental disorder. Yet, today, we see conservative actors around the world fanning the fires of fear by vilifying those who live beyond strict and harmful stereotypes of gender and sexuality. Eroding reproductive rights, curtailing racial justice, erasing LGBTQI histories, and scapegoating LGBTQI youth – the anti-rights political project to regulate and control our bodies, our lives and our futures is clear. But so is our work to create a world where everyone belongs.

In my last call with Urv, I told her I was leaving my job to become Vice President of Programs at Astraea. She paused and said “We need Astraea. I’m glad you took this job, do good work and don’t fuck it up.” I was a little flustered, a little flattered, and mostly just wanted to keep her respect. I promised her I wouldn’t.