As we bid farewell to Bob, we wanted to take this moment to reflect on her immense legacy and celebrate her profound impact.

As we bid farewell to Bob, we wanted to take this moment to reflect on her immense legacy and celebrate her profound impact. Bob’s passionate, visionary, and bold leadership grew Astraea in ways we could not have imagined. Bob steadily charted a course for gender, racial and economic justice that positions Astraea at the leading edge of intersectional LGBTQI philanthropy, while staying true to our lesbian feminist roots. Our founding mothers would be proud.

Bob always saw Astraea’s role as shifting power and resources from where they intentionally were to where they intentionally weren’t, yet needed to be—grassroots LGBTQI movements around the world. Bob accomplished this by expanding Astraea’s capacity to deliver resources to the most bold and brilliant LGBTQI groups in the U.S. and globally, as well as deepening our philanthropic presence and leadership, bringing an intersectional queer feminist lens to fields as diverse as internet freedom, communications, gender equality and racial justice. She started in 2011 as Astraea’s second Executive Director, with an organizational budget of $3 million and stewarded that to the sizable $13 million budget it is today.

A leader in queerying philanthropy, through Astraea, Bob imagined new and transformative ways of working together—to name just one example, she was the visionary behind CommsLabs, an innovative participatory movement-building initiative that networks LGBTQI activists and technologists. At regional and country-level convenings, grassroots activists connect with trainers, technologists, and healers who support them to effectively address threats and seize the opportunities available in the digital age. These convenings, co-designed by activists and centering wellness and holistic security while also building skills and capacity, exemplify Bob’s ability to break down silos and respond to the ways our movements are changing.

Under Bob’s leadership Astraea also expanded global LGBTQI philanthropy through strategic decisions to partner with bilateral governments like the innovative LGBTI Global Development Partnership. Through this initiative, we expanded grantmaking in 12 countries and shifted over $15.5M to grassroots LGBTQI movement-building, laying the foundation for future bilateral relationships and partnerships which have positioned us excellently for the next phase of our work.

With Bob, Astraea launched the first Intersex Human Rights Fund in the world in 2015, leveraging more than $2 million for the intersex movement globally, and we grew our U.S. work to combat the criminalization of communities of color, particularly Black folks and migrants. Bob oversaw the Global Arts Fund, building on our long legacy of supporting artistic and cultural change work, our Healing Justice: Building Power, Transforming Movements report, and our recent Feminist Funding Principles.

We are grateful to Bob for laying the foundation for Astraea’s next phase, setting us up so well to support the next generation of our leadership and the vision and talents of our incredible staff. We are excited to announce that we have identified an Interim Executive Director who will start in the coming weeks, and who will lead Astraea through a transition period for the next nine to twelve months. During the transition period, the Interim Executive Director will work with the Board and staff on laying the groundwork for the next permanent Executive Director. We look forward to introducing her to you soon!

It’s clear that Astraea’s role is more critical than ever in this time of escalating violence and oppression against LGBTQI communities, and the Board is committed to working closely with the Interim Executive Director and staff to continue to provide critical grantmaking and capacity building for LGBTQI grassroots leaders around the world. We will share next steps as they unfold and look forward to introducing you to the new Interim soon. Please join us as we enter this next phase of Astraea, share your support, questions and dollars—together we are building a more just and joyous world.

Iimay Ho and Eboné Bishop, Co-Chairs
On behalf of the Board of Directors 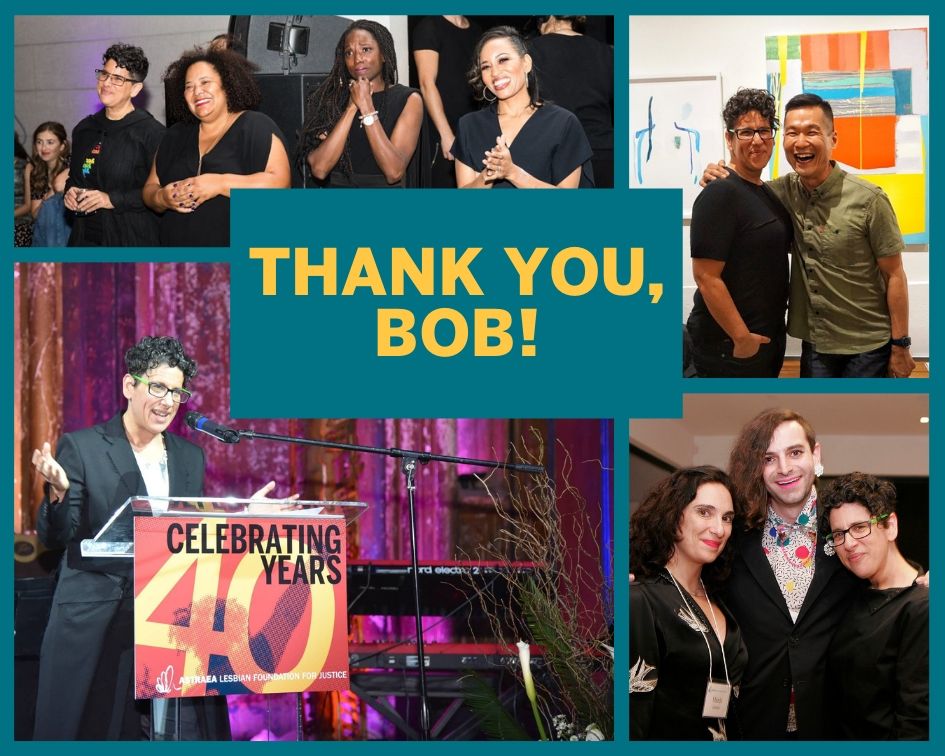