Jan Zobel – who passed away in September 2018 – was an Astraea community member and committed donor-activist for over 30 years. We are thankful for the time, energy, and love she gave to the Bay Area lesbian community, and for pushing the boundaries of philanthropy through her work, advocacy, and donor education. 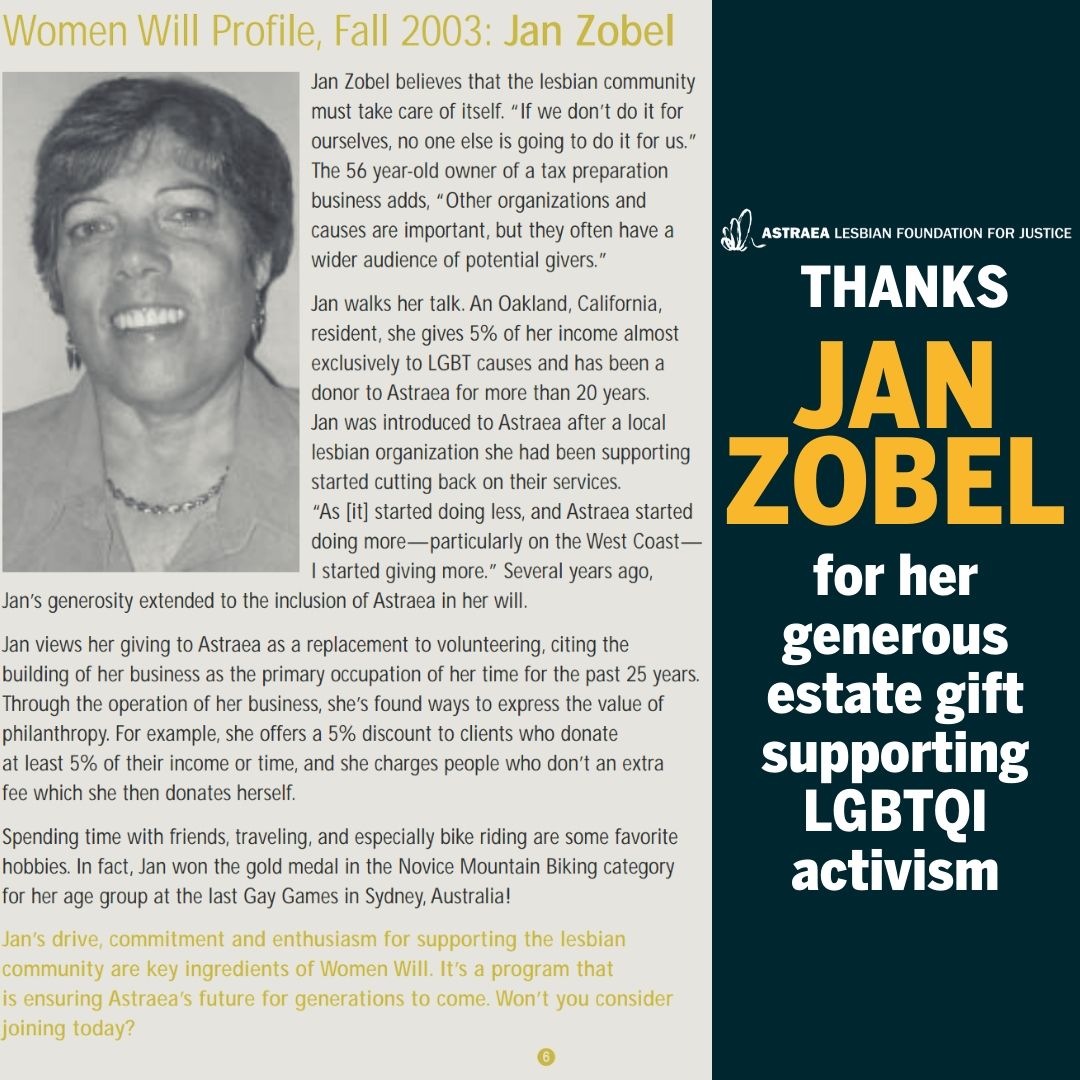 At Astraea, we believe community is everything, especially for LGBTQI organizers and movements. Jan Zobel—who passed away in September 2018—was an Astraea community member and committed donor-activist for over 30 years.

Jan was self-employed as a tax consultant and financial advisor to small businesses, particularly those owned by LGBTQ, women, and minority business owners. She received national recognition for her expertise in her field, and in 2005 she published the book Minding Her Own Business, geared specifically toward self-employed women and independent contractors.

Deeply steeped in the LGBTQ community of the Bay Area, Jan became involved with Astraea after a local lesbian organization she had been supporting started cutting back on their services. “As [it] started doing less, and Astraea started doing more—particularly on the West Coast—I started giving more,” Jan said in an Astraea newsletter profile in 2003.

As part of Astraea’s ‘Women Will’ circle, Jan encouraged others who could, to donate to Astraea. She also hosted and attended all of Astraea’s California based events, donor conferences and educationals, bringing together those with wealth as well as others who gave significant percentages of their income away. Jan’s generosity extended to the inclusion of Astraea in her will.

Jan was committed to increasing funding for the LGBTQ community at large. She joined the 100 Lesbians and Our Friends, a lesbian philanthropic community initiative started by Astraea donor Diane Sabin and Andrea Gelespy. She donated to and was associated with Horizons Foundation, a non profit in San Francisco for LGBTQ people. She also expressed the value of philanthropy to her clients, and through her business offered a 5% discount to clients who donated at least 5% of their income or time.

We are incredibly grateful for Jan’s extremely generous bequest to Astraea, and her unwavering belief in the movements we support. We are thankful for the time, energy, and love she gave to the Bay Area lesbian community, and for pushing the boundaries of philanthropy through her work, advocacy, and donor education.

Build a legacy and help sustain our movements for the long-haul. By making a planned gift to Astraea, you too can commit to fueling the next generation of LBTQI and feminist activists.

*This quote may be inspired by the words of Aboriginal artist and activist, Lilla Watson.