Honor author and activist Jeanne Córdova with us in LA

Astraea is thrilled to announce that we will be honoring Jeanne Córdova at our 2018 Fueling the Frontlines Awards on November 8th in Los Angeles. 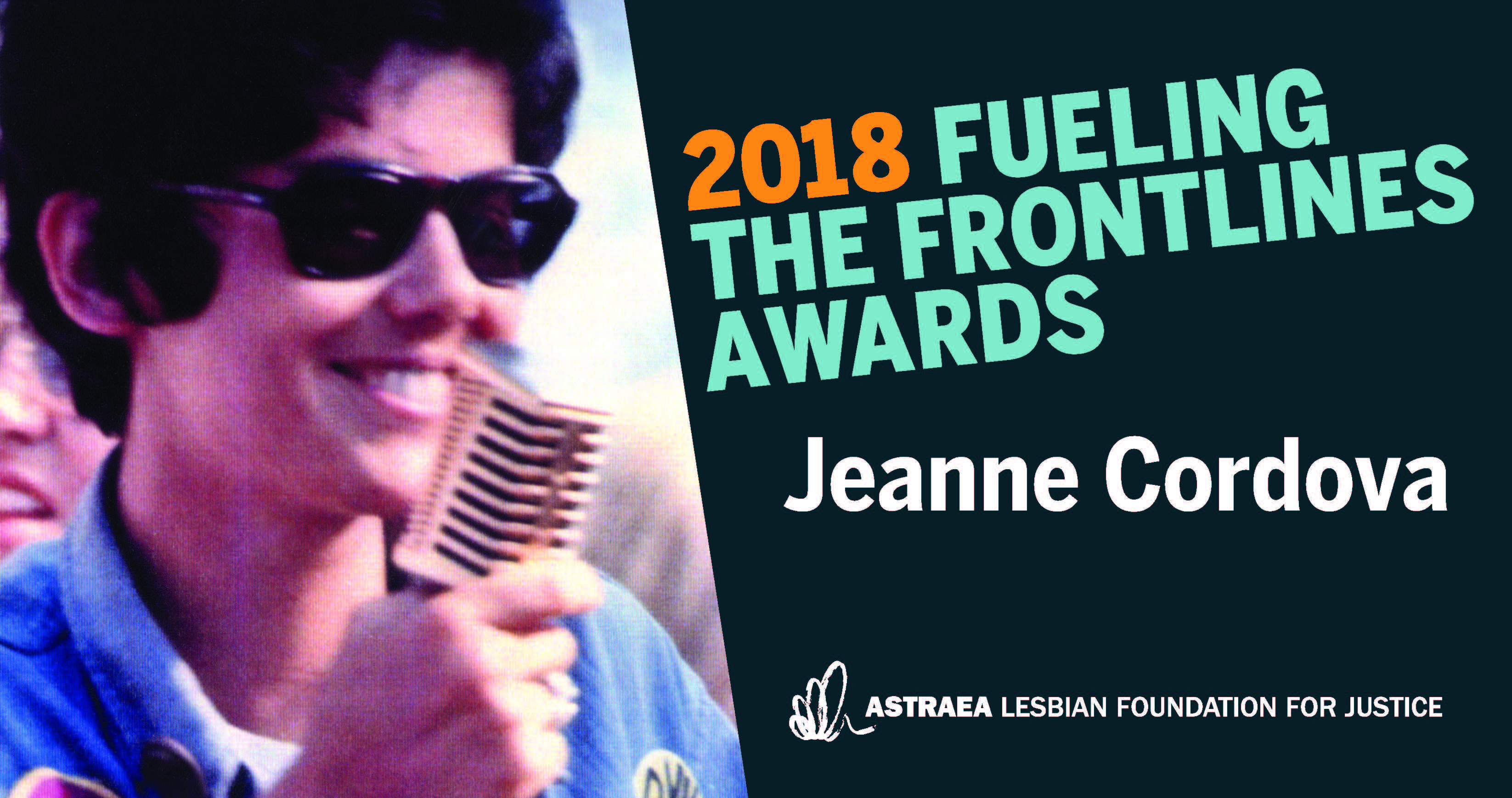 “Jeanne looked ahead and saw her generation of lesbian feminist activists, many of whom had been blessed to make comfortable lives for themselves, many of whom didn’t have children of their own, and felt it was really important to get the word out to them about giving to their lesbian and queer children, about giving back to their community.” –Lynn Harris Ballen, Jeanne Cordova’s partner

Astraea is thrilled to announce that we will be honoring Jeanne Córdova at our 2018 Fueling the Frontlines Awards on November 8th, 2018 in Los Angeles. Author, activist, and Chicana-identified butch woman Jeanne Córdova devoted her life to activism on behalf of the LGBTQI community. Although best and most recently known for her award-winning memoir, When We Were Outlaws, Córdova’s activism and collective organizing spans decades–from founding the popular 1970’s lesbian feminist newspaper The Lesbian Tide to acting as President of the Stonewall Democratic Club. Córdova’s contributions to the lesbian feminist and extended LGBTQI communities are phenomenal, yet at all times it was the power of community and shared lesbian leadership that fueled her philosophy. In A Letter About Dying, to My Lesbian Communities she thanked the thousands of members of the national lesbian communities whose activism, lives, and loves touched her own–“especially those dykes who have become family and siblings of choice over the last 40 years.”

Jeanne was committed to helping sustain the movements that supported her as a young Chicana-lesbian activist. Before Córdova passed away in early 2016, she proclaimed, “It is wonderful to have had a life’s cause: freedom and dignity for lesbians,” and announced that her estate would donate $2 million to Astraea to carry out just that goal. “We need to think about giving to our gay and lesbian youth and institutions like Astraea or other lesbian organizations. They’re the ones who are nurturing our real daughters right now, around the world,” Córdova wrote in her final letter announcing the donation. In 2017, the Jeanne R. Córdova Fund supported 14 powerful grassroots organizations in South/Latin America and Southern Africa that focus on movement-building, human rights, journalism and cultural activism among lesbians, feminists, butch and masculine and gender nonconforming communities.

Jeanne created so much more than a considerable legacy with her intentional bequest — she created decades of possibility — for Astraea, for our movements, and for our people. Jeanne exemplifies the visionary philanthropy we celebrate and depend on every day. It is in this spirit that we both honor and celebrate Jeanne’s formidable life and legacy at our Fueling the Frontlines Gala on November 8th.

Celebrate Jeanne Córdova with us on November 8th!

Tickets to the gala are now available at an early bird rate! Buy yours via the button below to #FuelTheFrontlines of LGBTQI activism and celebrate Jeanne Córdova’s legacy with us:

Questions about our Fueling the Frontlines Gala? For more information, contact Sally Troncoso at 212.810.4155 or stroncoso@astraeafoundation.org.