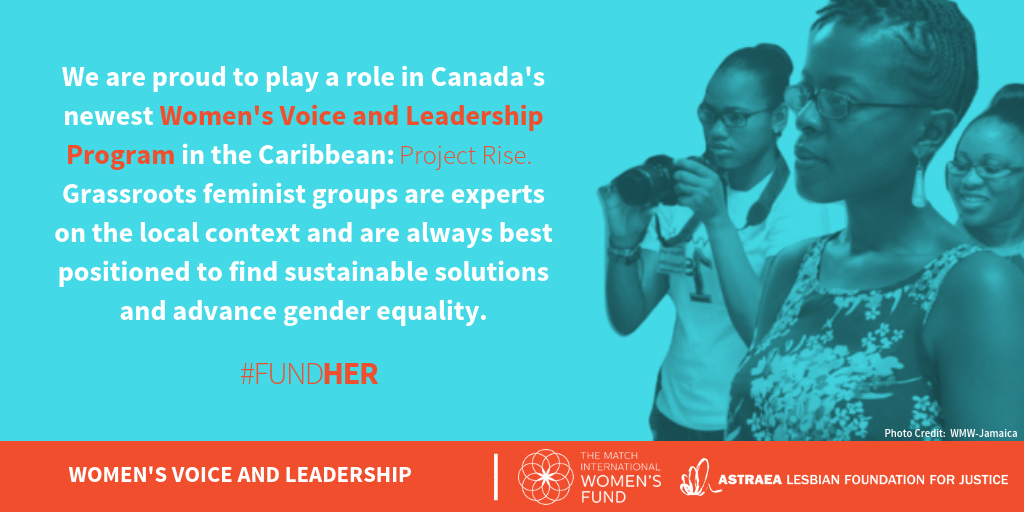 Working alongside women’s organizations in the region, The MATCH International Women’s Fund (The MATCH Fund) and Astraea Lesbian Foundation for Justice (Astraea) are leveraging funding opportunities from Canada to mobilize significant resources which will further the priorities of  feminist organizations in the Caribbean.

“In the current wave of progressive Caribbean women’s organizing, this grant from the Canadian Government could make a significant contribution to advancing our feminist agenda,”  said Peggy Antrobus, long-time Caribbean-based gender advocate and The MATCH Fund Board member.

According to early consultations undertaken by The MATCH Fund with local women’s groups over the past months , priorities include, but are not limited to:

However, additional research and consultations with Caribbean feminist groups will soon take place to further direct the initiative. Read our Project Rise backgrounder.

“Astraea welcomes the opportunity to play a partnership role in building the capacity and sustainability of grassroots LBT-led women’s rights organizations and movements in the Caribbean,” said Cara Page, Astraea’s Director of Programs.

“Historically there has been a major gap in support for groups led by and for lesbian, bisexual and queer women, trans and gender nonconforming people, and intersex people. By providing multi-year, core support grants to a variety of partners in the region, Project Rise has a strong chance to meaningfully advance human rights for women, girls and the LBTQI community,” said Page.

This Women’s Voice and Leadership initiative includes  multi-year funding for programs and advocacy, responsive funding for innovative pilot programs, support to increase advocacy capabilities to advance policy change in the Caribbean, and will facilitate movement building among diverse communities throughout the islands.

The project will also assess the viability of a regional  funding mechanism that could generate resources for Caribbean feminist movements beyond the life of the project.

The MATCH Fund and Astraea strongly believe that this significant increase of critical resources for grassroots women’s rights organising over the next five years will propel locally led organizations to advance human rights in the region.

“What’s most significant about Project Rise,” said The MATCH Fund’s CEO Jess Tomlin, “is that it will be led by grassroots Caribbean feminist groups – those who are experts on the local context, and who are best positioned to find sustainable solutions.”

“We look forward to learning from and working alongside Caribbean feminists in our shared efforts to advance human rights and gender equality,” said Tomlin.

The MATCH International Women’s Fund is Canada’s only global fund for women, girls, and trans* people. Working at the intersection of women’s rights and innovation, The MATCH Fund provides direct financial support to grassroots women’s rights organizations in the global South. We fund creative and courageous women to dismantle barriers, challenge perceptions, and change the world for women and girls. @MATCHIntFund

Astraea Lesbian Foundation for Justice (Astraea) is the only philanthropic organization working exclusively to advance LGBTQI human rights on a global scale. Through grantmaking, capacity building and leadership development, philanthropic advocacy and media and communications, Astraea provides critical strategic resources to hundreds of LGBTQI groups in the U.S. and internationally. To date, we have granted nearly $1M over almost 20 years of funding in the Caribbean. @AstraeaUpdates and www.astraeafoundation.org

In June 2017, The Minister of International Development, the Hon. Marie-Claude Bibeau, announced $150 million over five years for the Women’s Voice and Leadership Program, as part of Canada’s Feminist International Assistance Policy. The program is designed specifically to support the efforts of women’s rights organizations and movements in developing countries. Project Rise is the fourth project to be announced under the Women’s Voice and Leadership Program.

Astraea and The MATCH Fund Partnership

The MATCH Fund is Canada’s only global women’s fund, while Astraea is the sole philanthropic organization working exclusively to advance LGBTQ2 human rights around the world.

Both Astraea and The MATCH Fund share a rich history of support to grassroots activists and organizations advancing women’s rights and the rights of lesbians, bisexual, and transgender people in the Caribbean region.

The ultimate goal is to increase enjoyment of human rights by women and girls and the advancement of gender equality in the Caribbean,  through:

The MATCH Fund team also had substantive conversations with representatives of the Institutes of Gender and Development Studies of the University of the West Indies and other stakeholders in Canada and in the region, and attended a key convening organised by Caribbean activists in March to learn more about their priorities and agendas.