Farewell but not goodbye – A letter from Astraea Executive Director, J. Bob Alotta

“Today, after eight years, I am announcing I will be transitioning out of my role as the Executive Director of the Astraea Lesbian Foundation for Justice. While it is a move I do not make lightly, I do so with the full support of the board and the incredible staff of Astraea.” – J. Bob Alotta 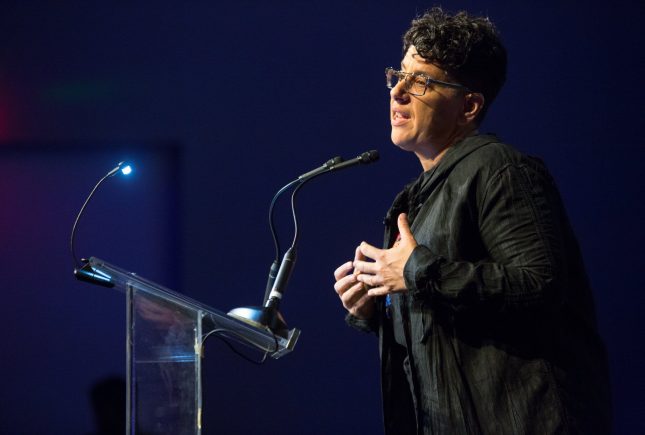 Today, after eight years, I am announcing I will be transitioning out of my role as the Executive Director of the Astraea Lesbian Foundation for Justice. While it is a move I do not make lightly, I do so with the full support of the board and the incredible staff of Astraea.

Astraea is and will ever be an entity of enormous transformation and purpose. As only the second Executive Director in an over 40-year herstory, I have had the incredible honor of evoking the anchor of lesbian feminism bestowed on us by our founding mothers, while building a future-forward organization that has now granted over $40 million dollars to LGBTQI grassroots activists and artists in over half the world.

We have realized exponential growth in such a short period of time: nearly six-toupling our budget, doubling our staff—who now span 10 cities, 6 countries, and three continents—with an ever-evolving eye for providing radically transformative grantmaking and capacity building on the ground. We have done so while expanding our philanthropic voice. Astraea has shown up and spoken up for philanthropic action that embodies the best of what we have learned as an institution: fund the long-game, respect the steps, fund without restriction, trust the innovation in our communities, center the voices at the intersections of lived experience, know we are the ones we’ve been waiting for. In short, be bold. And we have.

I am proud to have served a vision so much larger than myself—embodied by every activist/artist/donor who bravely shows up to bring a just and joyous world to fruition. They (you) have allowed me to bring my best self to work every day I was able. Running a foundation is not easy! Working in the movements you’re from is difficult. Building partnership and ally-ship, starting and sustaining conversations, growing while doing, being a singular entity in every room—all without a roadmap because it had never been done before—because I had never done anything like this before—is profoundly challenging, but that is Astraea’s charge. The staff shows up to this calling magnificently. My gratitude to them is immeasurable. It has been my deepest honor to work alongside them and steward us during this time.

Paramount to my decision to transition was being able to leave the organization in the best possible position. Two key factors make me confident I am doing so. This past year, we have secured significant multi-year partnerships that will ground the work both programmatically and organizationally for many years to come. These partnerships mark the next wave of “new beginnings” for Astraea. And now. I will work alongside staff and board leadership during a period of transition. You will continue to hear more from us as our next steps unfold. I suspect we will lean into you, our trusted community, as we enter the next stage of Astraea’s evolution. I am writing to you with so much gratitude and so much excitement for Astraea’s future. I urge you, as I surely will, to continue to support Astraea’s growth, purpose, and vision. We need her more than ever.

A letter from Astraea’s board:

As Bob announces her transition, we express our deep gratitude for her visionary leadership of the profoundly challenging and liberatory work that is Astraea’s charge. In the constantly shifting political landscape of the past 8 years, Bob has stayed steady, bold, and clear about Astraea’s role in transcending borders and building futures for LGBTQI people pursuing social justice and human rights.

She has expanded the organization and kept us on the cutting edge, positioning Astraea to the level of global influence we have today. As an ambassador for Astraea, Bob has excelled at navigating complex cultural and political spaces, breaking down silos, and centering LGBTQI human rights wherever she goes. Through her vision and work in partnership with Astraea’s incredible staff, we have accomplished many breakthroughs in strengthening the capacity of LGBTQI grassroots leaders.

Bob has led Astraea in a powerful arc of organizational growth and sustainability, and we are well-positioned to pivot to welcome a new leader. We ask our grantee partners to act in bold and transformative ways and so we are transforming ourselves as well by celebrating Bob’s accomplishments and meeting the evolving needs of the movement. In this current political moment of escalating violence against LGBTQI communities, it is clear that there is a heightened need for Astraea’s role. We are deeply committed to working with Bob to steward Astraea through this transition so that we can continue to provide critical grantmaking and capacity building for LGBTQI grassroots leaders around the world.

The Astraea board has begun the process of identifying an interim executive director and working alongside staff to create a roadmap for the steps forward. We thank Bob for her immense dedication to Astraea’s mission and wish her the very best as her next chapter begins.

Iimay Ho and Eboné Bishop, Co-Chairs
On behalf of the board of directors