On Bi Visibility Day and everyday, we advocate for the visibility and inclusion of bi people within the LGBTQI+ community, and challenge traditional, binary conceptions of bisexuality. 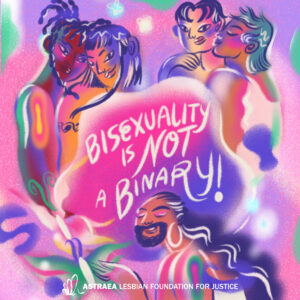 Started in 1999 by Wendy Curry, Michael Page, and Gigi Raven Wilbur – three U.S. based bisexual activists – Bisexual Visibility Day is celebrated annually on September 23. Originally intended to visibilize the long neglected bisexual community, Bi Visibility Day provides an opportunity to reflect on the biphobia and erasure that bisexual folks tend to experience within both LGBTQI+ and heterosexual communities, and to celebrate the richness of bi communities.

Bisexuality has often been misunderstood! In a binary world that seeks to classify people within fixed categories, people who are attracted to more than one gender have found themselves without a community to call home. Historical definitions of bisexuality have been confined within the binaries of absolute heterosexuality and homosexuality, which has led to the false belief that bisexuality limits sexual and romantic attraction to only those who adhere to cisgender ‘male’ or ‘female’ gender identities. This perception of bisexuality is harmful because it erases so many in the bisexual community whose desire, love, and attraction falls outside rigid gender norms.

Another misconception of bi people is that the way they express their sexuality is a ‘phase,’ rather than a recognition that their sexuality may be fluid and evolve over time, and that they may have relationships with people of several different genders over their lifetime. As a result, bisexual folks are often judged based on what their relationships outwardly appear to be, rather than who they are as a whole. Such degrading stereotypes have regularly forced bisexual folks to hide their sexuality, or to defend it to their queer counterparts in order to gain legitimacy within larger LGBTQI+ circles. Bisexual folks are often erased and/or alienated from LGBTQI+ communities, and made to feel as if they are not ‘queer enough.’

On Bi Visibility Day and everyday, we advocate for the visibility and inclusion of bi people within the LGBTQI+ community, and challenge traditional, binary conceptions of bisexuality. This day is also a self-reflective time for bisexual people to celebrate themselves, their communities, and their freedom to love and express their sexualities without limits. We must reach beyond the gender binary, envisioning a world in which we see desire, attraction, and gender itself as expansive and ever-fluid. Ultimately, this is what Bisexual Visibility Day is really about: ensuring bisexual communities flourish, and forever dreaming beyond the binary.

This Bi Visibility Day, we are honored to have collaborated with artist Ashley Lukashevsky to create the expansive illustration you see above titled ‘Bisexuality is Not a Binary!’ She is an illustrator and visual artist born and raised in Honolulu, Hawaii. They create art that utilizes illustration and visual art as tools to strengthen social movements for racial justice, immigrant justice, climate justice, mental health and LGBTQIA+ liberation. As Ashley shared on an Instagram post during last year’s Bi Visibility Week,“Whether your attraction to more than one gender is sexual or romantic, you are welcome in the bi community. Bi women are valid, bi men are valid, bi non-binary folks are valid, bi GNC cuties are valid— let’s end the gatekeeping of queerness once and for all.” She believes that in order to tear down harmful systems, we need to be able to envision a world without them. At Astraea, we are committed to supporting artists and their work, recognizing that art is an essential tool for social transformation.