Angela Bowen – It is our job to know her! 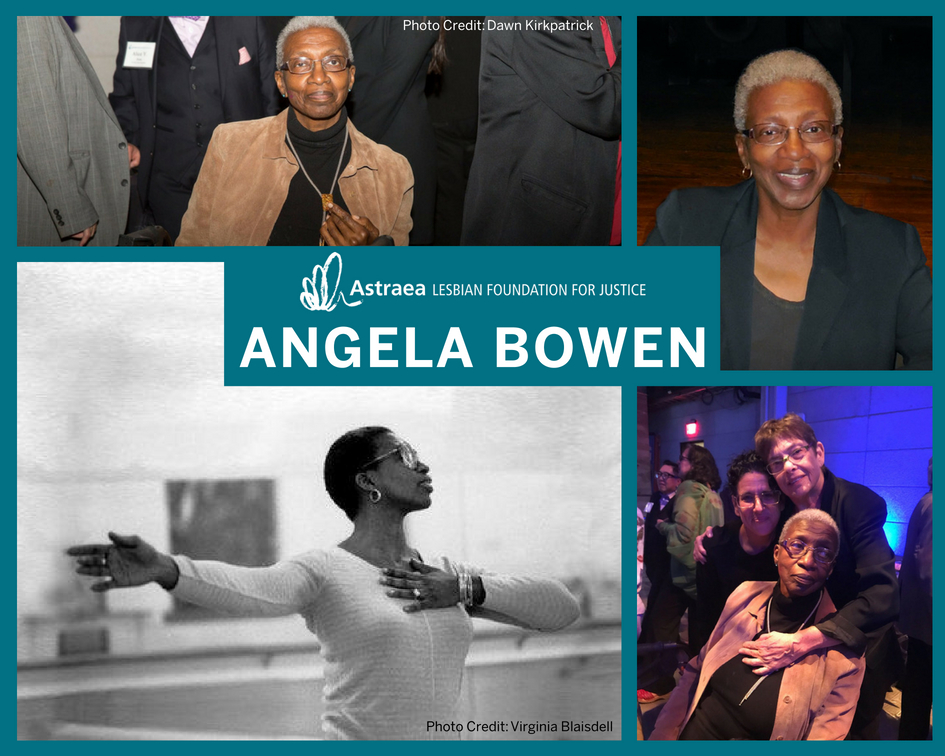 Black. Lesbian. Feminist. Artist. Activist. Organizer. Mother. Mentor. Writer. Professor. Intellectual. Her influence lives on in anyone who watched her dance, heard her speak or read her words.

It is with profound respect, sadness, awe and gratitude that we honor the life of Angela Bowen who died on July 12, 2018 at the age of 82, after fighting Alzheimer’s disease for a number of years. Astraea was privileged to recognize her formidable influence and the gift of her life by presenting her as an Acey Social Justice Feminist Award honoree in July 2017; the award honors lesbian and trans women of color over the age of 62 who have made significant but under-recognized contributions to our movements. It uplifts their legacy and tells their stories.

Angela Bowen followed her uncompromising vision across the decades of her life in the face of poverty, racism, sexism, ageism and homophobia. She influenced and inspired legends by being herself, encouraging people to have faith in themselves, to discover their own talents, and to follow their dreams, but not for themselves alone, rather to “move the line forward,” she said, reminding us “we don’t have to do just one thing.”

“I’m a black, lesbian, feminist, writer, activist,” Bowen once said. “I see all of those as equal functions. I feel as though I’ve got a mission to be out front.”

And indeed she was.

She trained and taught at the legendary Elma Lewis School of Fine Arts in Roxbury from 14 to 22. Her talent and skills enabled her to dance professionally and establish the Bowen Peters School of Dance in inner city New Haven, Connecticut, which she ran with her husband for nearly two decades. In the 1970s, she discovered feminism and specifically the work of poet warrior, Audre Lorde, leading her to follow a new life path. Bowen came out as lesbian in the 1980’s and was an active speaker, writer, and advocate for groups such as the National Coalition of Black Lesbians and Gays. She was one of the first recipients of a Ph.D. in Women’s Studies at Clark University. As an Audre Lorde Scholar, she wrote and spoke about the connections between and across social justice movements, advocating fiercely for black youth.

She met her longtime partner, Dr. Jennifer Lynn Abod, while living in Cambridge, and after more than 30 years together, she and Abod married in 2013.

When stories exploring the complexities of black lesbian women’s lives are rarely told, Angela Bowen is someone we should all know.

“Angela Bowen’s name should roll off our tongues with pride. She danced in and through her identities, owning blackness, lesbian feminism, vision and grace. It is our job to know her. This is why and how we need to stay connected,” said Astraea Executive Director J. Bob Alotta.

Read this interview with Jennifer Abod on the life and legacy of Angela Bowen and the film she made “The passionate pursuits of Angela Bowen”—because in the words of Audre Lorde, “Who would believe our stories unless we tell them?”