A new report, commissioned by Astraea, takes a snapshot of life in 2021-2022 for LGBTQI Nepalis, our first since 2015. Among its findings, the report demonstrates that despite securing basic constitutional rights on paper, LGBTQI Nepalis have yet to attain meaningful recognition, protection, and equity in everyday life. 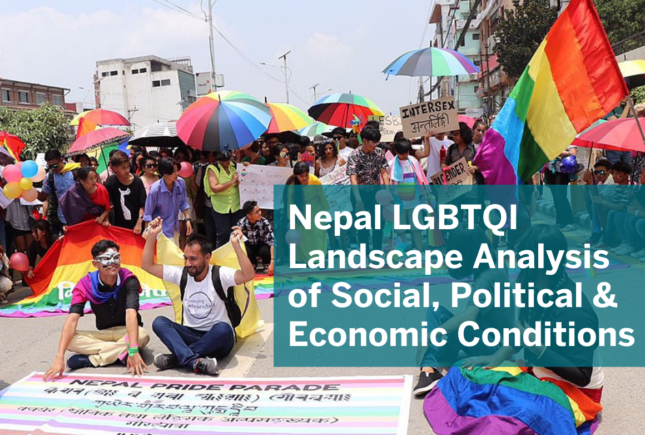 Over the last decade, human rights groups and the international media have celebrated Nepal as a unicorn in South Asia for its protection of LGBTQI social and political rights. The multilingual and multiethnic country, which is landlocked between India and China, was the first in the region to end legal discrimination and recognize “third gender” rights in Pant v. Nepal in 2007. Four years later, the country of nearly 30 million people made headlines again when it became the first to include a “third gender” category in its national census.

Movements and community-based organizations helped to drive many of Nepal’s legal changes in the early 2000s. Now, a new report, commissioned by Astraea, takes a snapshot of life in 2021-2022 for LGBTQI Nepalis, our first since 2015. Among its findings, the report demonstrates that despite securing basic constitutional rights on paper, LGBTQI Nepalis have yet to attain meaningful recognition, protection, and equity in everyday life.

Members of the LGBTQI community still face discrimination and lack access to basic services, such as healthcare, education, and employment. Many reported experiencing various forms of stigma, discrimination and marginalization, which is only exacerbated by their class, caste, religious or indigenous identity.

Access to government services further weakened during the COVID-19 pandemic and emerging legislative activity threatens activists’ ability to speak freely, especially for a younger generation of queer organizers who are frequently mobilizing online. Despite the current challenges, the report documents how Nepalese movements are pushing to actualize the hard-earned legal rights in the everyday life of queer people–and why it is a critical moment to support the country’s flourishing movements.

Our new report provides a community-centered overview of how funders can use a variety of strategies, such as long-term partnerships, general operating support, and capacity strengthening to instill lasting change for LGBTQI Nepalis who continue to face structural barriers. Key recommendations include:

Nepal has been celebrated around the world for its progress, but it is time to address the gaps between its policies and reality. Any meaningful progress in the country must reflect the lived experiences of diverse identities within the larger LGBTQI movement.