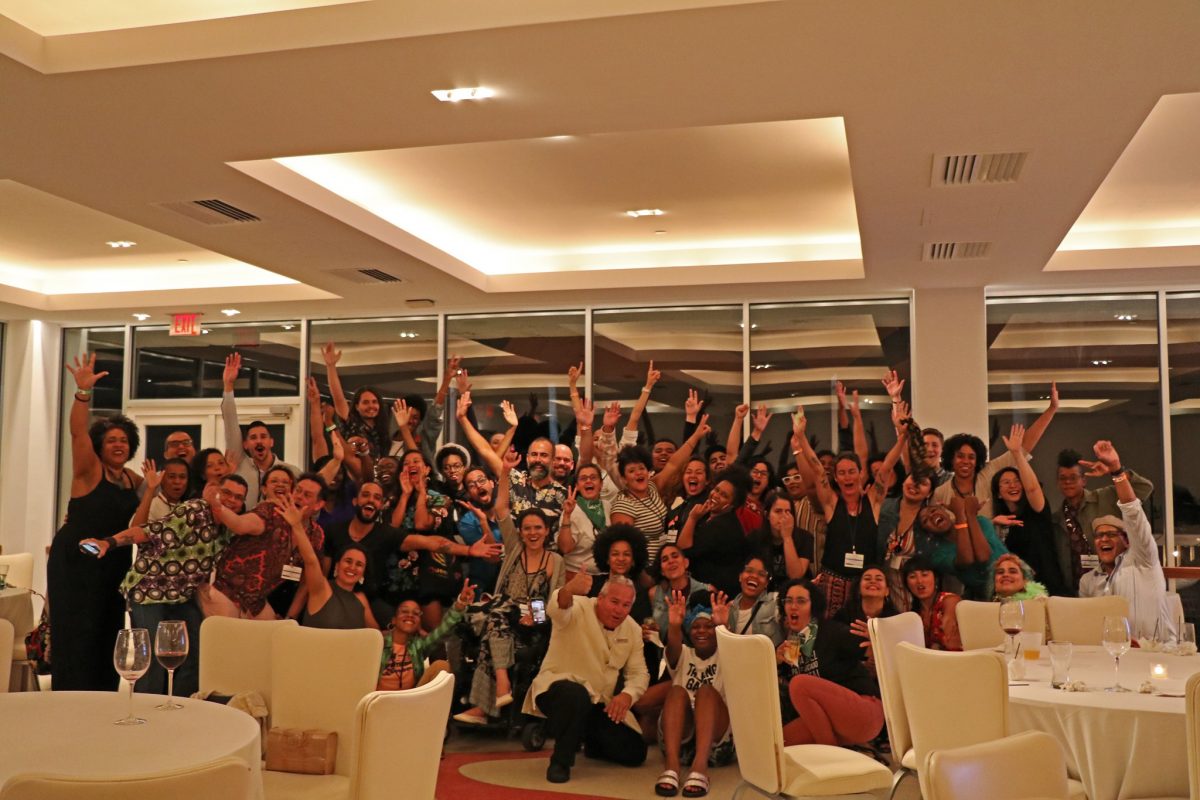 Over the last few months, the strength and power of the Puerto Rican movement has gained momentum. In July, widespread protests and massive mobilizations against government corruption, disinvestment in public goods caused by the debt crisis, and the state’s inadequate response to hurricane recovery efforts, led to the resignation of Puerto Rican governor Ricardo Rosello. We at Astraea continue to be in awe and inspired by the resistance and resilience of the communities and organizers in Puerto Rico.

In May 2019, we co-hosted a “Freedom from Violence and Criminalization Gathering” for U.S. and Puerto Rico-based grantee partners along with Borealis Philanthropy in San Juan, Puerto Rico. The decision to host this convening in Puerto Rico was intentional because we felt it important to recognize movement work on the islands, and to deepen our collective understanding of the work that is happening beyond the U.S. that resists and transforms state violence and hyper-criminalization of our people. Organizing and movement work in Puerto Rico today is building on a long history of resistance, and is deeply rooted in cultural and political traditions against colonization and militarism.

From transformative justice and budget advocacy sessions to breakout sessions led by organizers, the convening offered a generative space for participants to continue building connections and deepening their visions for what safety and justice looks like in communities of color in the U.S and in Puerto Rico. Through cultural programming organized by our Puerto Rican grantee partner Circuito Queer, participants learned about the political, social, and cultural situation on the archipelago, and witnessed some of the incredible cultural tools that Puerto Rican organizers are utilizing to build power. We received opening blessings from a local Taino elder, Kukuya, grounding participants in local healing traditions. Holistic wellness was woven throughout the programming, from sessions led by facilitators, Erica Woodland and Monique Meadow, to healing offerings such as massage, cuping, tarot reading, and acupuncture by local healers and practitioners. These were critical for organizers who often experience burnout and trauma as a result of ongoing state violence and oppression.

We interviewed some of Astraea’s grantee partners in attendance like MediaJustice (California), Law for Black Lives (National), Familia TQLM (California), and CIRQ (Puerto Rico) about what it meant for a convening on freedom from violence and criminalization to take place in Puerto Rico.

Astraea: Celiany, as a Puerto Rican activist who organized much of the local cultural programming for this convening, why was it important for you to connect some of the work here?

Celiany Rivera, CIRQ: A lot of what we’ve been doing at this convening is coordinating the cultural schedule as well as connecting the convening organizers with local Puerto Rican queer and trans healers. For us, it’s been an opportunity to showcase and share the queer and Black-centered art that is happening in Puerto Rico in a de-colonial context. We’ve tried to customize the experience of the participants so that they can get a sense of what some of the struggles are locally.

One of the events we coordinated that was very special to me was a dinner for participants with 21 activists who work locally on LGBTQ, racial justice, and healing justice issues. Plena Combativa was one of the groups that joined us, and is a Puerto Rican queer women-centred protest music group who performed at the end of the evening. I think this gave folks a perspective of who the people, colors, and flavors are that compose the activism and art happening in Puerto Rico. It was also an opportunity for local organizers who don’t always get to meet outside of organizing spaces to connect without an agenda and just build relationships.

Astraea: Steven and Marbre, what did you know about the Puerto Rican organizing arena before you got here?

Steven Renderos, MediaJustice: I was familiar with the work that the diaspora had done in the U.S. around Puerto Rican independence, but not so much with the work here in Puerto Rico itself. This is actually my first time visiting the island, but I think what I was aware of is that some of the issues that we work on today around surveillance were things that activists here have been dealing with since the Puerto Rican student movement of the 1960s and 1970s, and some of the organizing around those struggles has definitely influenced how we have developed some of our own work around high tech surveillance.

Marbe Stahly-Butts, Law for Black Lives: I had only been here once before on a business trip. I think what became clear to me was that a lot of the forces that we’re fighting against whether in New York City or in the South are at the extreme here in Puerto Rico, especially fights against capitalism and extraction. So I knew the broad strokes of what was happening; for example, the incredible organizing responses to the man made climate disasters that have been happening here. I was also acutely aware of the ways that business interests in the US and abroad are using Puerto Rico as a place to profit in the wake of these disasters.

Astraea: Umi, why did it feel particularly important for you to be at this convening strategizing around freedom from violence in Puerto Rico?

Umí Vera, Familia TQLM: For us it’s really important to connect with some of our coalition partners that are here that we’ve been building with, but also to connect with local community organizers here in Puerto Rico. It’s really important for us to get to share with one another about what our lessons learned in the work we’ve been doing, at both the local and national levels. I’ve been very influenced by a lot of Puerto Rican movement building and artists collectives on the mainland and I’ve heard a lot about the context of colonization on the island from some of our community members that are Puerto Rican, so I was excited to bear witness to that a little more, and see the work that they’ve been building out here.

Astraea: Marbe, how do you feel like we and CIRQ as the convening organizers brought Puerto Rico into the space and how did that impact your experience?

Marbre: This was one of the most intentional openings around honoring the space we’re in, the land that we stand on, and the history that brought us here, as well as the connections that we all bring from our own lands, and it really set the tone for the convening.

I have been particularly struck by two things: one is the intentionality around language here and making sure that there isn’t a language that feels like it’s dominant language. Our struggles are international, multilingual ones, but we are so often in language silos. I was also struck by the fact that it felt like half the room were folks from Puerto Rico who work here. So often there’s only one person who speaks on behalf of thousands in a community but this felt far more intentional and holistic, where organizers from the mainland and Puerto Rico were equally involved, engaged, and invested.

Astraea: Steven, how has it affected your experience to be here on this colonized land where issues of freedom from violence and criminalization are felt in such a real way?

Steven: You know within MediaJustice we often talk about this concept of targeting universalism, this idea that if we hone in on solutions for the most affected we actually yield greater outcomes for the whole. So thinking about surveillance in the context of a colonized island and solutions around budget advocacy – an area that is becoming increasingly privatized on every level – has been especially poignant here. I think even having gone out in San Juan and met with some of the community groups and seen what their responses have been to some of the challenges that they’ve encountered has been helpful to think about our own tactics. There is a creativity here that emerges from a lack of resources that those of us in the more privileged sectors and geographies need to learn from.

Puerto Rico has been part of the U.S.’ colonial project for over 120 years now. Puerto Ricans have no representation in the federal government and are not allowed to vote unless they move to one of the 50 U.S. states. Many Puerto Ricans have been fighting for full independence from the United States, and particularly against the austerity measures which have destroyed the local economy.

In 2017, Hurricane Maria, a deadly category 5 hurricane, hit the archipelago. Both the U.S. federal government and the government of Puerto Rico were slow in their response to the disaster. Nearly 5,000 people died and over 80% of Puerto Rican households were without electrical power for over 100 days.

The Freedom from Violence and Criminalization Convening

The convening brought together 52 activists and organizers who are part of 30 organizations that Astraea and Borealis either collectively or respectively fund through Borealis’ “Communities Transforming Policing Fund” and Astraea’s “Freedom from Violence and Criminalization” cohort, within our U.S. Fund.

These organizations work across the country and in Puerto Rico, their work spanning the effects of criminalization, policing, and state violence on LGBTQI people and People of Color, working towards police reform, dismantling the criminal justice system, visibilizing healing justice strategies, and much more.

Want to stay up-to-date on Astraea updates like the one above? Join us!