Astraea Lesbian Foundation for Justice is disheartened to report that in the past several weeks, LGBT activists have been the target of violence in Haiti, Cameroon, and Jamaica.

Participant at an anti-gay march on July 19th in Haiti

In Haiti, violence erupted in mid-July, with one regional Caribbean LGBTI advocacy group, CariFLAGS, reporting a human rights emergency for LGBTI people has developed in Haiti. The group reported that Haitian LGBT activists received violent threats and that a violent anti-gay march was organized on July 19th by a coalition of religious fundamentalists. The anti-gay march mobilized over a thousand people and resulted in several severe attacks. In response, Astraea Foundations grantee partner Femme en Action Contre la Stigmatisation et la Discrimination Sexuelle (FACSDIS) signed a civil society statement along with 19 Haitian and Dominican civil society groups who work on human rights and support the LGBT community. FACSDIS and other signatories are demanding an end to the violence, accountability for the perpetrators, and calling on the Haitian government to take concrete steps to protect LGBT human rights defenders.

Violent attacks on LGBT activists and people have recently resulted in tragic deaths as well. On July 15th, LGBT and AIDS activist Eric Ohena Lembembe was found tortured to death in his home in Yaoundé, Cameroon. Executive Director of Cameroonian Foundation for AIDS (CAMFAIDS), Lembembe was a leader in the fight against AIDS and for the human rights of LGBT people in Cameroon. His murder came weeks after Lembembe spoke out against recent break-ins at offices of local gay rights advocacy groups. The office of one organization, Alternatives-Cameroun, was set on fire on June 26th. LGBT and sexual health and rights groups in Cameroon issued a joint statement calling on the government of Cameroon to investigate and condemn Lembembes murder and take strong measures to stop this wave of violence. They are also calling on religious groups and the media to work with the LGBT community to build a constructive dialogue on issues relating to sexual orientation and gender identity.

Lastly grantee partner Jamaica Forum for Lesbians All-Sexuals and Gays (J-FLAG) reported on July 23rd that a gender non-conforming young person, Dwayne Jones, in Montego Bay, St James was mob killed. Jones, also known as Gully Queen, was displaced at an early age and was one of the many LGBT youth who live and work on the streets. J-FLAG calls on the community to support the Jamaican police in their investigation to bring the perpetrators to justice.

In this moment of heightened hostility, extreme threats to safety, and human rights violations against LGBTQI people in these regions, Astraea Lesbian Foundation for Justice adds its voice to the widespread call to the Haitian, Cameroonian, and Jamaican governments as well as the international community to ensure the safety of LGBTQI people and human rights defenders in these countries. We urge legislative bodies to respond promptly to these attacks in due respect of the rights of LGBTQI community members and human rights defenders to safety and dignity. As the attacks and deaths have created heightened environments of hostility, we urge these countries and the international community to speak out against the discrimination, criminalization, and persecution of LGBTQI people in these regions and around the world.

Femme en Action Contre la Stigmatisation el la Discrimination Sexuelle (FACSDIS) was founded in July 2010 as a response to the discrimination and violence LBT women and sex workers faced in Haiti in the context of the earthquake. 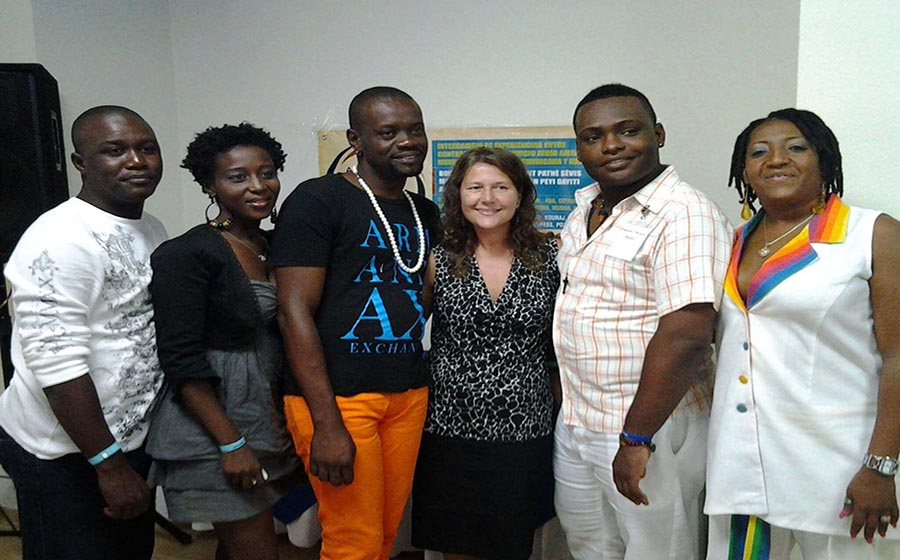 Femme en Action Contre la Stigmatisation el la Discrimination Sexuelle (FACSDIS) was founded in July 2010 as a response to the discrimination and violence LBT women and sex workers faced in Haiti in the context of the earthquake. FACSDIS’s mission is to end stigma and gender discrimination and to support the struggle of oppressed and marginalized women such as LBT women, sex workers and people living with HIV. Outside of the capital, Port Au Prince, they work with LBT women to raise awareness, build their capacity to advocate for their rights, and promote access to jobs, health care and education. They organize and respond to the rape commonly targeting butch and masculine-presenting women in the community. They work to address the stigma around rape, and they do workshops with police and judges so that their response to these cases is not lesbophobic and discriminatory, furthering the trauma and violence survivors experience. They also work with incarcerated women, LBT women and sex workers who are criminalized for who they are and have no due process; they have helped to free several LBT women who were wrongfully incarcerated.

The Astraea Foundation is deeply saddened by Tuesday’s earthquake in Haiti and its devastating aftershocks. We stand with the people of Haiti, their friends and their families in this time of crisis. Among many, many others, Flo McGarrell, the director of our grantee partner, Fanal Otenik Sant D’A Jakmel (FOSAJ), did not survive the earthquake. Our condolences go out to his family and to all who knew and loved him. Haiti and the LGBTI community have lost a brilliant and committed activist, humanitarian, and artist.

We had the opportunity to meet Flo and a FOSAJ member in the spring of 2009, during a visit to New York. We were very impressed and inspired by their work; recent visits to Haiti by close allies of Astraea in the past few months have confirmed that the group was making an important contribution in the lives of LGBTI people there. Astraea is making efforts to get in touch with the group and provide additional support.

Astraea has also been in touch with grantee partners in the Dominican Republic, which shares the island with Haiti and was not affected by the earthquake. The lesbian feminist collective Las Tres Gatas and trans group Transsa Dominicana are working in solidarity with Haitian communities in both countries. Members of Las Tres Gatas are traveling to the border and into Haiti to provide medical and social services. Other members have stayed behind to raise funds in areas highly frequented by LGBT people to contribute to the effort on the ground. They plan to collaborate in rebuilding efforts in the coming weeks and to support women, girls, and LGBTI communities in healing through the use of theatre and arts therapies. The two groups intend to connect with LGBTI communities and leaders in Haiti to assist in rebuilding their organizations. This solidarity work has important implications given the long history of deep racial and national tensions between the two countries.

In times of intense loss and chaos, too often women and LGBTI people experience increased violence, and Astraea calls for aid efforts that recognize their leadership, help prevent violence and provide services.

Astraea stands ready to provide emergency support to our grantee partners in Haiti and the Dominican Republic. But we need your help!

Donations to efforts that are grounded in the leadership of women and LGBTI people with a long-term goal to rebuild are much needed. Your donation will help mobilize LGBTI-inclusive efforts in solidarity with all Haitians, and will be directed to one of our grantee partners working in Haiti.

Please donate to support Haiti now. Thank you so much.