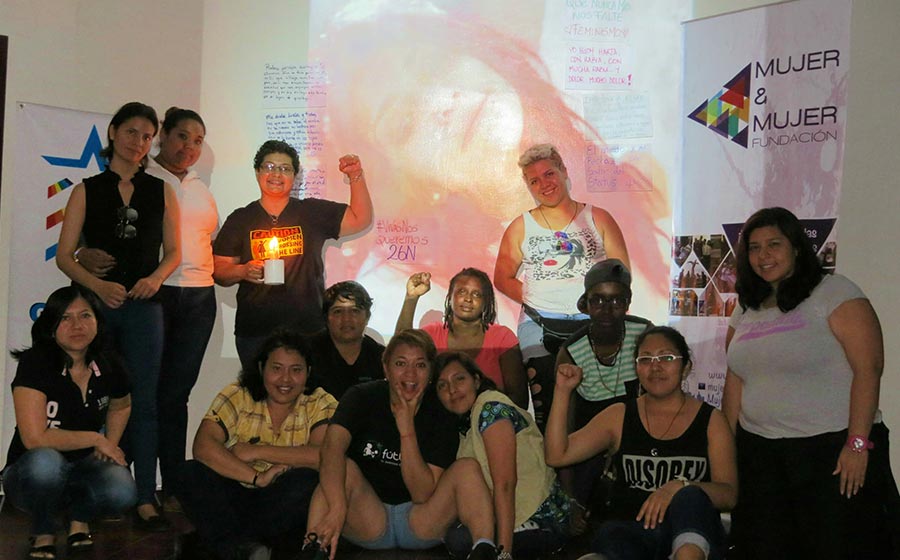 Astraea grantee partner, FEDAEPS (Fundacion Ecuatoriana de Acción y Educacion para la Promocion de la Salud) was an instrumental actor in achieving the recognition of sexual and reproductive rights and a commitment to non-discrimination on the basis of sexual orientation in the Ecuadorian Constitution of 1998.

This made Ecuador the second country in the world to have this Constitutional clause and the first in Latin America to recognize sexual rights. In 2007, the anti-discrimination provisions were challenged as the process for constitutional review began. FEDAEPS received an emergency grant to support their work to defend the protections of sexual orientation and diversity in Ecuador’s constitution. And in September 2008, they won. The Constitution passed with 64% of the vote, and included other progressive victories such as guaranteed free education through college and pensions for stay-at-home mothers and informal-sector workers.

By the Associated Press, as seen on 365Gay.com

(Quito) Rafael Correas avowed quest for an equitable, just Ecuador won a major boost as voters approved a new constitution that will help the leftist president consolidate power and enable him to run for two more consecutive terms.

”We’re making history! Onward!” a jubilant Correa proclaimed in his coastal hometown of Guayaquil after his crushing victory became clear. This is confirmation of the citizens revolution were offering.

He and the close associates who helped him craft the new document hugged each other and sang Patria, their party anthem.

Correa called on Ecuadoreans to help him achieve a brave, sovereign and dignified homeland – equitable, just and without misery.

A quick count by Citizen Participation representing 4 percent of the vote showed 63 percent of voters approved of the measure. The count had a margin of sampling error of plus or minus half a percentage point. Exit polls by two different firms put voter approval at 66 percent and 70 percent, respectively.

Correa, 45, called it a clear, historic victory, an endorsement of his goal to secure a social safety net for the 38 percent of Ecuadoreans who live below the poverty line. He also has said the document will help to eradicate a political class that made Ecuador one of Latin Americas most corrupt countries.

Although the new magna carta is nowhere near as radical as similar projects in Venezuela and Bolivia, critics complain the document will give Correa too much control over the economy and the judicial and legislative branches.

It will almost certainly lead to presidential, congressional and local elections as early as February – making a Correa presidency through 2017 possible – and an overhaul of the judiciary in which the president is expected to play a decisive role. The Central Bank and other key institutions also would cede or lose autonomy to Ecuadors sixth president in a decade.

That should give the U.S.- and European-trained economist greater liberty to fashion what he calls a new political model. Sunday’s victory was Correa’s third nationwide electoral victory since he won office in November 2006 with 57 percent of the vote.

“He’s going to activate the productive sector,” said Patricio Quienacho, 48, the owner of a computer business who voted “yes” on Sunday in large part because he believes Correa will spur job growth through a program that offers five-year $5,000 business loans at 5 percent interest.

But many wonder how Correa will pay for all his ambitious social programs.

“I don’t know that we have all the resources to really guarantee all that he’s offering,” said Carlos Roman, a 57-year-old engineer who voted against the new charter. “It’s dangerous for the country.”

A third of the national budget comes from oil revenues and Correa has had the good fortune of oil prices soaring well above $100 per barrel, providing Ecuador with revenues of $4.8 billion this year alone.

Some in Correa’s badly splintered and debilitated opposition contend he’s creating a Venezuela-style autocracy. But while Correa followed Hugo Chavez’s lead by pushing for a new constitution to help him consolidate power, he has kept the Venezuelan president at arm’s length.

Unlike Chavez and Bolivian President Evo Morales, Correa has not moved to nationalize telecommunications and electrical utility companies or pledged to establish closer relations with Russia.

And although Correa has opted not to renew the lease that allows U.S. anti-narcotics missions to fly out of a coastal airport in Manta, U.S. diplomats praise Ecuador’s drug-fighting cooperation. The lease expires late next year.