November 25 – December 10 marks the ‘16 Days of Activism against Gender-Based Violence,’ an annual international campaign to challenge violence against women and girls. Astraea grantee partner in South Africa, Forum for the Empowerment of Women (FEW) works to combat violence and injustice against Black lesbian women in the townships of South Africa, which is particularly prevalent, but often silenced. 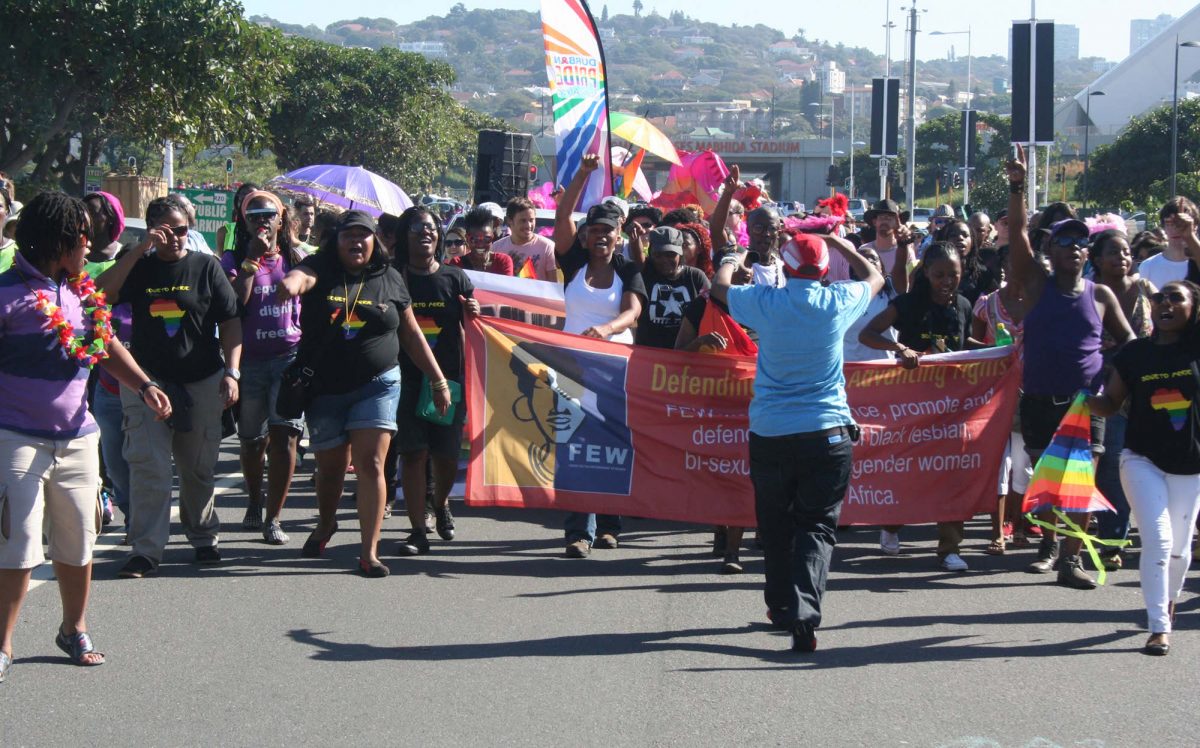 One of the first organizations of its kind in South Africa, FEW, based in Johannesburg, is a black lesbian feminist organization engaged in advocacy, education and action to ensure that black lesbians enjoy holistic freedom in all aspects of their lives. While on paper the South African constitution does prioritize human rights and equality for all, poorer queer, black women living in the townships are often targets of widespread discrimination and violence. FEW works to empower black lesbians in the townships to celebrate and navigate their sexualities and queer identities.

FEW are also the organizers of the annual Soweto Pride march, first launched in 2004. Soweto is a township of the city of Johannesburg, home to anti-apartheid icons Nelson Mandela, and Archbishop Desmond Tutu. Continuing the township’s history of advocating for freedom from oppression and violence, Soweto Pride is a grassroots-led Pride march and celebration for those who have often felt left out of the more corporate-endorsed Johannesburg Pride march, as well as to bring visibility to the black lesbian community of the townships.

As 2018’s Soweto Pride activities came to an end, Astraea Foundation Program Officer Lame Olebile sat down with FEW’s Jade Madingwane, to discuss the history and significance of Soweto Pride, the future of FEW, and how Black lesbians in South Africa are creating spaces for themselves and reclaiming their voices.

LO: How is FEW working to center black lesbian leadership?

JM: There is a real need in the townships to have conversations around what it means to be lesbian, black, and feminist, and there is also a critical need to center Black lesbian leadership, in order to prioritize the specific concerns faced by black lesbians. FEW is the only organization that works with lesbian women; there are provinces that have LGBTQIA+ based orgs but not ones that are specifically Black lesbian focused because there’s a lot that comes with being Black and lesbian, just like there’s a lot that comes with being gay or trans.

One way FEW is doing this is through the creation of the Rainbow Activist Alliance (RAA), which is a network of 15 LGBTQI community-based organizations across the country collectively working to create safer communities, ensure access to appropriate public health care, ensure non-discrimination within the criminal justice system, and build black lesbian leadership. We are really working to have the RAA up, running, and strong so that its members can become leaders in their various townships and advocate for issues of greater visibility and access for constituents.

LO: What do you feel are the politics that are fundamental to Pride, and specifically to Soweto Pride? What is its significance?

Soweto Pride is also about raising awareness about violence and discrimination in the townships and communities we live and exist in. I can’t take a walk and hold my girlfriend’s hand because it can lead to violence. We need to openly say, we know that women are dead because of their identities, and we know that most hate crimes also happen within the township, and we can’t disregard these things. It’s about having conversations about why people are violent towards black women’s bodies, and particularly lesbians? What is it that upsets people about us being queer?

Being visible matters. Women are so often looked down upon by communities, and told, you need to be a mother, and cooking and cleaning, but a lot of people don’t seem to think that women have politics. For me, being out there and claiming the streets of Soweto is critical because I exist in those streets and it’s not like I can just go somewhere else. I need to celebrate my queer identity in these streets and I need to start where I come from as a Black lesbian woman.

LO: Pride itself has been a contested issue in South Africa, thinking about the interruptions of Joburg Pride, by activists and the politics that was rooted in. How different from white corporate Joburg pride do you feel Soweto is? What is the local feeling of Soweto Pride?

Joburg Pride is for the rich, for a lack of a better word; it is for people in the North who have houses with high walls and proper security, where they can be lesbians freely. We don’t have that. Joburg Pride is not a free Pride that is accessible for Black people that are marginalized and come from the townships. Soweto Pride looks like a free pride for all, Soweto Pride looks like raising awareness in the streets, and celebrating your queer identity even if you don’t have the money. At Soweto Pride, anyone can come and dance and network and celebrate themselves as a queer person.

LO: What are some of the challenges you have experienced in organizing in Soweto?

JM: Organizing is one hell of a job; it is taxing and emotional and draining. One of our main challenges is finding the balance between creating social spaces for our communities, and more targeted organizing spaces. We can’t always be putting our minds to work, like wondering “what are we going to do about the police that are brutalizing us?” etc, because that is so emotionally and mentally exhausting. We need to have social spaces because they function as a coping mechanism for many of our constituents, because we’re always talking about serious things and these spaces give us a break from that.

Another challenge we face as an organization is the intergenerational divide in the townships. We have a lot of people who say, “hey you’ve been doing this work for a long time, I’m sure a lot of people have gotten it by now that we’re lesbians and we’re here to stay,” but for us the constant organizing and advocacy work is critical because generations differ in their attitudes and points of view. So, we’re constantly working to sensitize people and raise awareness in different ways about the lives of black lesbians in the townships.

LO: So what do you see as the future for FEW?

JM: For me, the future of FEW looks like going back to some of the things we used to do really well. Like reviving the lesbian soccer team or drama series we used to have, ‘The Roses Have Thorns’ which was a project in different townships where they had plays that spoke to living as Black lesbian women. Those stories are really powerful because they tell their queer narratives, which we don’t often get to hear. Now, we’re not even accessing places like radio stations where we can have narratives by queer people, whereas before those spaces existed for those stories which help queer people to see themselves. So for me it looks like having these things back up and running, which are both entertainment, as well as advocacy tools which help us learn things. It’s also having those safe spaces for Black lesbian women because it’s really tough not having those spaces as queer people, and having to force yourself into spaces where you are not welcome.

LO: And what does the future hold for Soweto Pride?

JM: For me, the most important thing is having that visibility within the streets of Soweto. So we should move around a lot for Soweto Pride and not just have it in one area, because we can’t always be visible in just one area. The future looks like moving around different townships and having queer people be a norm within these townships and not necessarily in one area where we know it’s safe to be queer but also in those spaces which make us uncomfortable, but where we also know queer people exist.