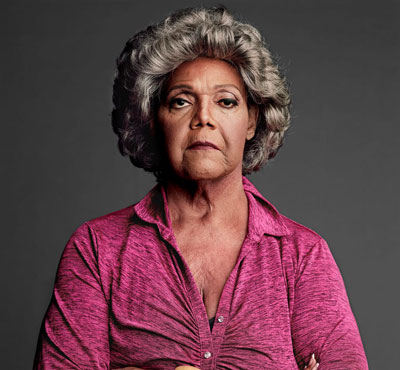 Miss Major is a veteran of the historic “Stonewall Rebellion” and a survivor of Attica State Prison, a former sex worker, an elder, and a community leader and human rights activist. She is simply “Mama” to many in her community. Her personal story and activism for Transgender civil rights intersects LGBT struggles for justice and equality from the 1960’s to today. At the center of her activism is her fierce advocacy for her girls, Trans women of color who have survived police brutality and incarceration in men’s jails and prisons.

Miss Major is formerly the long-time executive director of the San Francisco-based Transgender Gender-Variant Intersex Justice Project (TGIJP), which advocates for Trans women of color in and outside of prison. She is the recipient of countless awards, proclamations, certificates, and public accolades for more than 50 years of a legendary and pioneering career in social justice and activism. Most notably, she is also the subject of a new award-winning documentary feature film currently showing around the country and in foreign film markets – “MAJOR!”

In an open letter, Astraea grantee partner Center for Artistic Revolution of Arkansas describes the successful campaign to pressure a bigoted school board vice president to resign after posting comments on Facebook that called for more LGBT teens to commit suicide.

This past week has been a firestorm of controversy, a fire ignited by the horrible statements made on Facebook by Midland School Board Vice-President Clint McCance that called for gay kids to commit suicide.

After a few days of intense organizing working to secure Mr. McCances resignation, CAR went to Pleasant Plain, Arkansas. Our purpose was to put more pressure on the school board and Mr. McCance to ensure that he resigned. We conducted a vigil at the Midland High School commemorating the lives of the 11 teenagers who took their lives in September as well as all those who have killed themselves because of being tormented by remarks much the same as those of Mr. McCance.

Thirty-five LGBTQ and ally community members stood together in the cold morning wind, most without jackets holding their memorial signs as well as signs that called for Mr. McCances resignation. In our meeting with the school superintendent and the school board president we promised to continue to return to Pleasant Plain until Mr. McCance resigned. And late last night, on the Anderson Cooper show, he did just that; he resigned.

We won! By working together – standing fast, standing brave, and standing publicly, we won! We were determined; already the plans had been made to return to Pleasant Plain and we were committed to returning day after day until he resigned. Thank you so much to all who participated in this campaign. We know that so many of you were calling and writing. And wed like to especially thank those who were able to make the trip to Pleasant Plain. We must be seen, we must be heard, we must continue to have dialog.

Still, there is so much more to be done. Here in Arkansas LGBTQ students or those who “appear” to be LGBTQ have experienced verbal harassment, been tripped, pushed, slapped, robbed, chased, sexually assaulted and in some cases beaten terribly. There have been suicide attempts. LGBTQ youth who are bullied are at a greater risk for quitting school, substance abuse, risky sexual behavior and homelessness. Every student deserves the right to be protected in school!

We hope that you will join with CAR and other concerned community members and help us not only make our schools safer for ALL students, but to continue the important mission of securing Fairness and Equality for ALL Arkansans.

The Arkansas Times
McCance has resigned

Astraea Grantee Partner, Center for Artistic Revolution (CAR), is a founding member of Arkansas Families First, which is documenting how Act One is affecting alternative families and the more than 1,000 children languishing in foster care. More about CAR.

By Bonnie Miller Rubin for the Chicago Tribune

Anne Shelley and Dr. Robin Ross are unwinding after a jampacked day of ferrying 4-year-old daughter Eva Mae from preschool to ice-skating lessons to speech therapy.

“It’s pretty much your mundane American family,” said Shelley, 46, over a dinner of barbecue at their home near the Ozarks.

But not everyone sees their domestic situation as a hefty slice of apple pie. Arkansas residents recently voted to ban people who are cohabitating outside of a valid marriage, as Shelley and Ross do, from being foster parents or adopting children as these women did.

The measure was written to prohibit straight and gay people who are living together from adopting or becoming foster parents, but it’s real objective, child welfare experts say, is to bar same-sex couples like Shelley and Ross, 52, from raising childreneven if it means youngsters who desperately need families will wait longer.

“We don’t have enough quality homes as it is, and now we’re going to place more restrictions?” asked Susan Hoffpauir, president of the Arkansas chapter of the National Association of Social Workers. ”A lot of us are still shell-shocked by this.”

While the Nov. 4 vote to ban gay marriage in California grabbed the headlines, it is same-sex parenting that is heating up as the next skirmish in the nations culture wars. Last week, a Florida judge struck down that states decades-old law preventing gays and lesbians from adopting.

Nationwide, laws on the issue are a grab bag. Florida had been the only state that had a law specifically disallowing gay individuals from adoption, although they are allowed to be foster parents. In Utah, only heterosexual, married couples can adopt. North Dakota law permits child-placement agencies to rule out prospective adoptive parents based on religious or moral objection.

Conversely, in Illinois, prospective foster and adoptive parents can be single or married, and the states Department of Children and Family Services cannot use sexual orientation as a basis for exclusion.

Still, many Americans are opposed to placing kids in gay households, and social conservatives hope the issue will rally voters in the same way that same-sex marriage has in recent elections.

In Arkansas, some 3,700 children are in state custody, taken from their homes because of abuse and neglect. “Of those, 960 kids (average age: 8.5 years) are available for adoption,” said Julie Munsell of the state Department of Human Services. Of the 1,100 foster homes, one-third are headed by single people.

But beyond the state system, the ban set to take effect Jan. 1 will thwart private adoptions of children like Eva Mae, left at a Vietnamese orphanage with nothing but a yellow blanket and a gaping hole where her upper lip should have been. Moreover, opponents say the new law could jeopardize a wide range of non-traditional living arrangements, such as co-habitating grandparents raising grandchildren, and are not sure how far-reaching the impact will be.

“However, such scenarios are a smokescreen,” said John Thomas, vice president of the Arkansas Family Council, a conservative group that pushed to get the initiative on the ballot after it had failed several times in the legislature. “The real issue,” he said, “is that the state has to set the bar higher when it comes to finding homes for children.”

”I understand that there is a lack of homes, but I refuse to believe that the choice is between a horrible situation and a so-so situation,” Thomas said from the groups Little Rock headquarters. “The council took its message directly to churches, speaking out against the gay agenda.”

But finding potential homes for foster children is a continual challenge across the country—especially for children who are older and have special needs. Some 129,000 U.S. children are in foster care, and the only criteria should be who can best provide a loving, permanent home, according to Adam Pertman, executive director of the Evan B. Donaldson Adoption Institute.

In a recent report, the non-partisan group concluded that a national ban on gay adoptions could add $87 million to $130 million to foster care expenditures annually because these children would then be living in other types of institutional care, such as group homes.

“On its face, this [Arkansas] law is just crazy,” Pertman said. “I fear what will happen if other states see this as a model.”

Social conservatives say the state could alleviate the shortage of foster and adoptive parents by stepping up efforts to recruit better candidates. “We have the opportunity to create the very best families,” Thomas said. “That’s what we should be aiming for.”

Still, a broad coalition of child-advocacy organizations—including the American Academy of Pediatrics—came out against the ban, as did Gov. Mike Beebe and former President Bill Clinton. Polls, too, predicted its defeat.

So, on Election Night, Shelley and Ross—who have been together for nine years—were cautiously optimistic. Then they were stunned. The measure passed in all but two counties.

Eva Mae is sprawled out on the living room floor, intently working a puzzle, oblivious to all the adult anxiety.

The two women traveled to Vietnam in 2007, returning with a lethargic 2-year-old, who, because of a cleft lip and palate, could not swallow or talk and had not been outside since she was born.

Eva Mae endured several surgeries—and while her speech is still difficult to understand, she has all but caught up to her peers in other developmental areas. “She is very smart,” said Shelley, a former community organizer turned stay-at-home mom.

The American Civil Liberties Union is weighing a legal challenge to the ban. But people are afraid to bring attention to their families, said Rita Sklar, executive director of the ACLU in Arkansas.