Astraea’s grantmaking is approximately half domestic and half international. We are committed to supporting the fight for justice in the United States, where we are based, and working in solidarity with global movements of LGBTQ people fighting for their rights in their own contexts.

For our 2016 fiscal year, over 80% of our expenses supported grants and programming in support of 234 grantee partners in 62 countries, including over $3.5 million in grants. 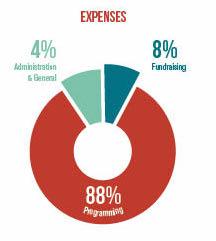 Astraea’s community of supporters is made up of visionary institutions, government agencies, private sector businesses, and thousands of individuals and giving groups across the globe who know that their financial support – big or small – can bring about significant social change for LGBTQI people.

Astraea remains true to our roots and to a multicultural work environment. Our staff, board, and advisors are LGBTQI-led, representing diverse sexual orientations, gender expressions and identities, and sex characteristics, and majority of people of color.

Yes! As a public foundation, Astraea raises and distributes millions of grant dollars each year. We are often the first funder to hundreds of organizations, playing a catalytic role for innovative and emerging LGBTQI organizations across the globe.

At Astraea, we embrace feminism as part of a wider struggle for social, racial and economic justice, since we recognize that sexism, misogyny, and restrictive gender norms hurt everyone. We see feminism as a powerful framework that enables us to discuss how bodies, identity, sexuality, oppression, and liberation interact, and we reject feminism that rejects gender and bodily diversity.

Astraea partners with organizations across the LGBTQI spectrum that work for racial, economic, social, and gender justice. The word “lesbian” in our name acknowledges the insight and legacy of our founding mothers: a handful of multi-racial, multi-class women with a lesbian feminist vision of self-determination, community empowerment, and movement building across issues and generations. We continue to prioritize work led by lesbian and queer women, along with work led by trans folks and intersex people, as we grow and evolve alongside the movements we support.